Home » Blogs » What the Auto Industry Can Teach IT Development

The latest and greatest advances in technology often draw the spotlight, but the truly great changes in business aren’t driven by technology alone. They’re enabled by a change in culture that’s supported and accelerated by technology.

Consider the assembly line in the auto industry. Automation, specialized tooling and robotics have provided a boost to quality and efficiency, but these advances only mattered because of a change in U.S. culture that emphasized speed, acceleration and economies of scale. Henry Ford capitalized on these cultural constructs to implement an innovative set of tools that revolutionized auto production. Toyota led the next evolution in auto manufacturing with its implementation of the Andon cord and Kaizen continuous improvement (CI) but similarly, these tools depend on a culture of trust and respect for the workers to be useful.

In the field of software development, a similar shift is taking place through the DevOps movement that’s leading to faster, more efficient and higher quality application development. Technology has made DevOps easier to implement, but these new tools only add value when they are accompanied or even implemented via a change in culture across the entire organization and all technology areas. This includes items such as visualizing the delivery value stream to identify areas for improvement, increased trust and collaboration across silos and a CI mindset.

A key aspect of DevOps is automation, and automation is only possible when patterns can be created, which requires eliminating any variances in practices and capabilities in all aspects of the organizations that don’t add value. For example, if every application is a snowflake in terms of its architecture and configuration, infrastructure automation won’t be possible. If release planning, management and deployment don’t have standard work associated with them, then again, an integrated delivery pipeline capability cannot be implemented.

At Nationwide, we began a change in how we developed applications almost a decade ago. At the time, the term was “agile.” We shifted application development to focus on smaller iterations of work with automated build and testing practices. While this proved valuable, we realized this was only part of the journey of accelerating our lead time from customer concept through delivery of business value.

We started the journey to implement a Lean-based DevOps model that encompasses the entire development value stream, from the incoming business request to application deployment and monitoring. Our goal was to work more closely with the business units to continuously plan, design, develop, test and deploy incremental improvements in our application-based products.

Nationwide has seen demonstrable benefits on this journey. Critical defects have declined by 80 percent, system availability is up 70 percent and on-time delivery of applications has risen to 90 percent from 60 percent. More importantly, we’re starting to see results in our business as we refine our ability to test business hypotheses and measure the results in terms of increased revenues.

Infrastructure to Support the Cultural Shift

Just as Ford’s auto assembly line utilized advanced technology to be successful (e.g. electricity enabled optimal placement of machines versus steam power), accelerated delivery is utilizing the development of new technologies. To advance DevOps, we use IBM Rational and UrbanCode software to manage and deploy applications. The new technology, though, has only worked because we have committed to both a technology and cultural change across our entire organization. We have more than 5,000 IT professionals on 200 different teams. Every team—whether it’s responsible for the mainframe, distributed, web or mobile— needs to utilize the same standard work approach to application development.

Let me give you one example of how that works: Biweekly show-and-tells are a core part of our approach. For new mobile applications, the changes after two weeks might be dramatic, but even for the larger applications running on our IBM z Systems mainframes, the teams have something to share. They break the mainframe application work into smaller units and demonstrate updates they’ve made that fit into more long-term initiatives.

The Autobahn for Application Development

While applications and products are not all developed at the same speed (e.g. a change to a mobile app versus a regulated change to back-end banking system), there is a need for these systems to utilize similar approaches and a common delivery pipeline with visibility of dependent changes, to be implemented as quickly as possible.

An example of this is a highway like the Autobahn accommodating different types of drivers and vehicles, such as a Porsche built for speed and a semi-truck built to carry cargo. The rules of the highway allow vehicles to drive at different speeds safely without having stoplights by providing exit and entrance ramps, speed limit minimums and visibility of other vehicles along with “standard rules of the road.”

Likewise, we want our IT delivery capability to accommodate variable speeds of IT based on the business needs and the development teams’ abilities to go faster by implementing practices such as smaller batch sizes, APIs and microservices, feature flags and performing automated testing and readiness validation. While distributed and mobile applications might be the Porsches on the road, they can only go as fast as the mainframe and legacy applications, or semi-trucks and other traffic will allow.

No company will get through the next decade without being disrupted, either externally or internally via a continuous improvement and innovation mindset.  Those that embrace Lean and DevOps practices across the entire IT organization will have a steady stream of new services and improvements that outpaces the competition and transforms their business. Those who don’t will join former Fortune 500 companies that waited too long to realize that their competitor’s Porsches and semi-trucks were too far along to catch up with.

About the Authors / Carmen DeArdo and Jason Patterson 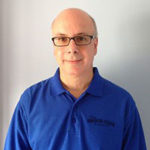 Carmen DeArdo is the director of Build Technologies at Nationwide Insurance. He is responsible for helping drive accelerated delivery utilizing Lean and DevOps techniques across the end-to-end delivery value stream.  One current focus area is the creation of an integrated delivery pipeline capability. 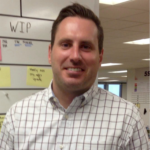 Jason Patterson is a Lean and Agile coach at Nationwide Insurance. He works with development and support teams across the company to help recognize process gaps and opportunities in their delivery stream. His background in development fuels that energy, while he resists the urge to automate every broken or unnecessary process. After nearly a decade at Nationwide and seven years experimenting with extreme programming, scrum and agile methods in a software development department at Indiana University, Jason is still learning.

« Simplify and Streamline Hybrid Cloud with DevOps
DevOps: The Glue of Workflow »