At the Open Source and Software Development Conference (OSCON), WSO2 this week announced it has updated an open source microservices gateway to make it possible to expose multiple microservices through a single application programming interface (API).

Additionally, version 3.0 of the WSO2 API Microgateway now includes the ability to automatically discover microservices and transform legacy API requests into a more modern format. WSO2 also added support for the OpenAPI Specification (OAS), formerly known as Swagger, to make it easier for developers to collaborate on creating APIs, and has separated the WSO2 API Microgateway toolkit from the runtime to enable greater scalability and smoother upgrades.

Ken Oestreich, vice president of product marketing for WSO2, said the WSO2 API Microgateway is designed to accelerate the convergence of application development and integration into a single team. As part of that effort, WSO2 has been advocating the adoption of Ballerina, a general-purpose programming language designed from the ground up to make it easier for developers to integrate distributed applications on their own. For example, Ballerina makes it possible for developers to create and embed their own micro-enterprise service bus (ESB) within a distributed application, he said.

Those integration engines then could be deployed and updated within any DevOps processes layered on top of a continuous integration/continuous deployment (CI/CD), Oestreich added.

A WSO2 API Microgateway is designed to boot up in less than a second and provides authentication, authorization, rate limiting, service composition, discovery, transformation and analytics capabilities. It is designed to be integrated with the WSO2 API Manager, an open source API management platform that can run on-premises or in the cloud. 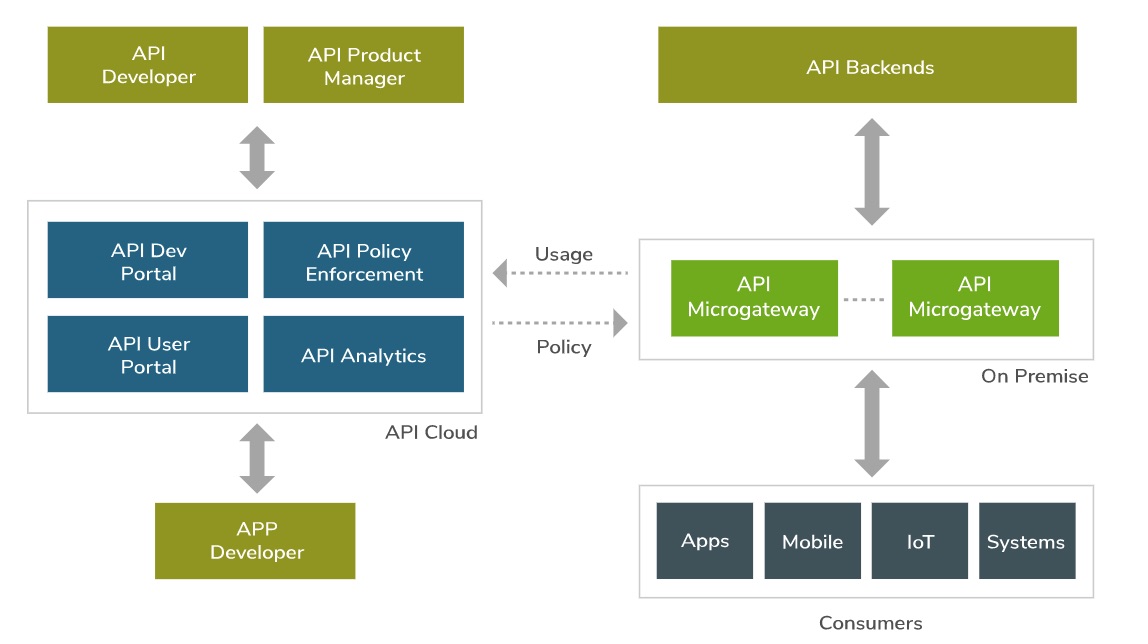 As the number of microservices being created within organizations increases thanks to the rise of containers, Oestreich noted there is now a critical need for organizations to find a lightweight approach to building and managing all the APIs required to connect thousands of microservices. WSO2 provides a flow diagram through which organizations can visually manage that process, said Oestreich. As part of its support for containers, the WS02 API Gateway provides built-in support for container orchestration tools such as Kubernetes, which makes it possible to generate artifacts that can be applied directly to Kubernetes clusters.

Organizations of all sizes are clearly struggling these days with API management. In theory, APIs should remain stable as the software components they connect to are updated. The trouble is, each new microservice generates its own set of APIs, and before too long, organizations find themselves trying to manage thousands of APIs that are all dependent on each other. The removal of any one API might not crash an application, but it could adversely impact performance as API calls are re-routed around the application.

It’s not all clear these days who inside most organizations is responsible for managing APIs. Developers certainly create the APIs. However, once they are deployed in a production environment, their care and feeding often pass over to an IT operations team. Regardless of whom, however, once any of those APIs break it’s not long before the entire DevOps team knows about it. The challenge now is figuring out how to make the management of all those APIs as natural an extension of a DevOps process as possible.

“The Automated Enterprise” e-book shows the important role IT automation plays in business today. Optimize resources and speed development with Red Hat® management solutions, powered by Red Hat Ansible® Automation. IT automation helps your business better serve your customers, so you can be successful as you: Optimize resources by automating ... Read More
« Low-Code Has Taken Development by Storm. Why Not the Web?
Curly Brackets »