Accurics today announced it has integrated its tool for discovering violations of security policies that occur when developers provision infrastructure as code with both the continuous integration and continuous delivery (CI/CD) platform and the static application security assessment testing (SAST) tools from GitLab.

Om Moolchandani, chief information and security officer (CISO) and CTO for Accurics, said both integrations make it easier for developers to discover security issues earlier as part of a DevSecOps workflow using the company’s Terrascan tools.

Many of the issues organizations are having with cloud security these days can be traced back to misconfigurations created by developers when configuring infrastructure using tools such as Terraform. Accurics created Terrascan to identify those misconfigurations. 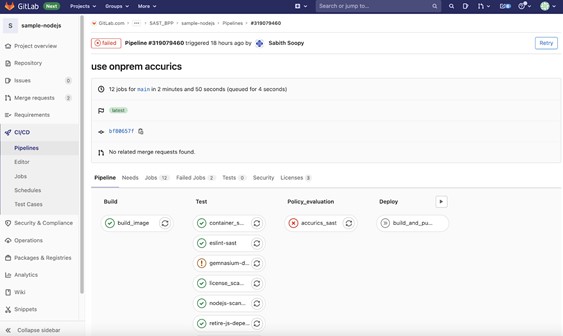 The integration with GitLab makes it easier to incorporate Terrascan into a DevOps workflow in a way that also aggregates data collected from both SAST and dynamic application security testing (DAST) tools, said Moolchandani. That approach effectively unifies what today are two separate cloud infrastructure and application development pipelines by enabling DevOps teams to employ threat scores to enforce security policies as code that are deemed too risky to deploy with block builds, he added.

At the same time, the integration with SAST and DAST tools provides the context developers need to prioritize remediation efforts before applications are deployed in a production environment, noted Moolchandani.

Organizations of all sizes are now trying to strike a balance between two conflicting agendas. On the one hand, infrastructure-as-code (IaC) tools such as Terraform have played a critical role in enabling developers to build and deploy applications faster. The issue is that developers lack the security expertise required to ensure infrastructure is secured properly at a time when cybercriminals are more aggressively seeking to compromise software supply chains. Organizations most likely won’t slow down the rate at which applications are being deployed to make sure software supply chains are not compromised. However, in the absence of best DevSecOps practices—which still are not widely implemented—there may be a backlash against shifting application responsibility left toward developers.

The challenge that creates is most organizations don’t have enough security expertise available to review applications in a timely manner before they are deployed, which results in them hoping security issues will be discovered and remediated during the application update cycle before cybercriminals find a way to exploit a vulnerability.

Of course, hope does not make for an application security strategy. Organizations will need to find ways to enable developers to better secure applications while simultaneously making it easier for cybersecurity teams to maintain a zero-trust IT environment that reduces the chances organizations will be breached via, for example, a phishing attack to steal developer credentials.

Regardless of how DevSecOps workflows and zero-trust IT architectures are implemented, it’s clear organizations have run out of time to resolve longstanding security issues that are now making the kinds of headlines no one wants to see.

Why You Should Embrace Incidents and Ditch MTTR