Home » Blogs » It’s All About the Tools: Lifecycle Security and Testing

In the past, whenever a new application or a new version of an application was bought to market, users often were abused as beta testers for security and usability. This was largely because of a lack of opportunity to test a large codebase effectively and efficiently.

Similarly, the subsequent patches and new applications versions were rolled out with minimal testing, often fixing the existing bugs but introducing just as many new ones. Because users didn’t know there was an alternative, they accepted this situation grudgingly, and the consensus formed that there was no such thing as bug-free software.

Today’s users are much less tolerant of bugs, particularly when those bugs are security vulnerabilities in hosted applications. Nowadays, anyone offering an application online rarely has to wait long for hackers to examine the weaknesses, which, for suppliers, means the integrity of their own networks are at stake. Finding these security weaknesses in e-commerce applications or online booking systems, for example, is highly attractive to hackers because of opportunities for identity theft or to issue ransomware that may damage the company’s sustainability.

Hackers don’t just target the obvious bugs in applications. Distributed Denial of Service (DDoS) attacks increasingly are aimed at an application rather than the network infrastructure, often making the application unavailable to legitimate users.

Developers need to ensure they understand the importance of security and load testing over the application development life cycle. To deliver more secure products to market, it is essential to identify the aspects of development that can harness security faults and address these challenges with the time and financial support of C-suite and IT executives.

Lack of Time for Security Testing

Security defects must be avoided as much as possible. This requires intensive testing and the right tools. Time is precious, and time-to-market often is a critical success factor for new applications. For IT decision makers, it’s necessary to balance these security concerns and time pressures with an organization’s appetite for risk and its allocation of resources.

In addition, IT leaders and developers need to look at the effectiveness and agility of their security testing. Agile software development decreases the period between software releases from months to days or even hours. It is widely acknowledged that the classical iterative, develop-test-develop process for troubleshooting takes too long, so it often is overlooked. As a result, security defects often still find their way into software versions and must be eliminated later, which drive costs higher. For example, according to the National Institute of Standards and Technology (NIST), the cost per defect in the development stage is US$80, but quickly jumps to US$960 per defect in the testing stage and US$7,600 in production. NIST estimates that these costs amount to almost US$60 billion annually in the United States alone.

Developers are widely aware of the growing challenges with security testing. In a recent Ixia survey of 363 developers, a clear majority of respondents nominated security testing as the most critical component of the development cycle. In fact, 93 percent report they subject their applications to security testing during the development process early, and continuously. And yet, two-thirds of the respondents admitted to delivering products with bugs and/or security flaws. Whether this is because of a lack of time, appropriate tools or financial support, this can put application security and functionality and an organization’s network at risk. Subsequently, eliminating these defects with patches or updates is at least four times more expensive than addressing them during development.

A range of comprehensive security testing solutions are emerging to integrate security testing more closely with the development cycle. These solutions give developers powerful and comprehensive test environments to monitor application behavior carefully in response to DDoS attacks, malicious traffic and automated attacks, which lets developers identify bugs or vulnerabilities at the encoding stage. These tools also generate realistic traffic for load and safety tests to simulate a wide range of protocol mixes and traffic patterns. In addition, these solutions include development tools such as integrated debuggers that import and replay recorded packet captures.

These solutions also streamline communication and reporting within multifunction teams via a range of community features such as referrals, real-time feedback and task allocation. Using a completely virtualized solution also lets developers improve security testing across the application life cycle while minimizing any hardware or infrastructure investments. Plus, the agile CI/CD model helps disparate teams across the service provider—QA, production, development and vendor collaborate effectively and streamline discovery and resolution of issues found in different phases to accelerate the time to market.

The ability to increase the development team’s agility and speed while improving application security is making many IT decision makers sit up and take notice. With company boards requiring IT departments to respond more quickly and effectively to technology opportunities, IT leaders are seeing the benefits of this new way of working that combines the twin priorities of agility and security.

Developer teams should communicate clearly with IT executives to secure the required time, money and resources to ensure new applications and updates undergo rigorous and realistic tests before they are released to market to face the mercy of hackers. Using commercial tools and systems for security and load tests help to determine the behavior of applications under different stress loads. They also help developers deliver products to market in a more cost-effective, timely and agile manner.

About the Author / Phil Trainor 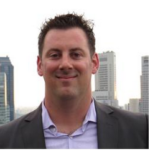 Phil Trainor is Head – Security Business, APAC at Ixia. Phil has worked in the network security industry for 14 years holding senior level engineering roles at California-based startups. He was recently a guest lecturer at the 2016 RSA Conference in Marina Bay Sands discussing ‘Advanced Persistent Threats’ and has also lectured at Blackhat, DefCon, ToorCon, and at many other prestigious security events.  Connect with him on LinkedIn.

Now, more than ever, companies who rapidly react to changing market conditions and customer behavior will have a competitive edge.  Innovation-driven response is successful not only when a company has new ideas, but also when the software needed to implement them is delivered quickly. Companies who have weathered recent events ... Read More
« 5 Leadership Keys to Enterprise Agility
Full Stack Engineer »