The show floor for CA World 2017 had one inescapable, very obvious feature: There was DevOps as far as the eye can see. No kidding. It was a stunning reminder that this multibillion-dollar-revenue company has gone all-in on DevOps and related technologies. While we know CA has spent almost a billion and a half dollars acquiring DevOps-related companies in the last year, the effect on this year’s CA world was dramatic.

What Was All That DevOps?

CA World is organized so that most of the sessions except the keynotes are all conducted right on the expo floor. The floor is broken into distinct areas. Each area has its own theater, where sessions on the subject of that area are conducted. It is actually a great way to organize a conference like this and saves you from going to room to room, floor to floor. 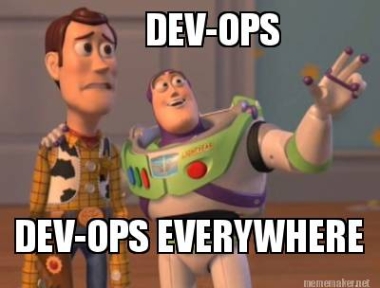 As you can see, a lot of DevOps right there.

All Your DevOps Are Belong To Us

But more than the real estate of the show floor, even the messaging coming from CA was “all DevOps, all the time.” The keynotes from the executive team were heavy on DevOps and related topics. The sessions at each theater featured household-name customers mixed with partners and CA people discussing DevOps-related topics.

One presentation I found interesting was from the GM of the DevOps continuous delivery business, Jeff Schaeffer. It was a demo of a new product CA rolled called DevOps Continuous Delivery Director, a SaaS product that is a UI wrapped around a lot of the CD-related solutions from CA and leading partners. All kinds of testing, including testing from Sauce Labs and security testing from Veracode was possible from within the interface.

I moderated a good panel on Continuous Testing: Shifting Left, which was well-attended. I was joined by customer reps from Cigna, a large financial institution, Groupon and others. This was also in the DevOps CD area.

The mainframe theater stage featured a DevOps panel session to showcase a cross-BU perspective. Panelists included Aline Gerew from Automation, Steve Feloney from Continuous Delivery, Scott Morrison from APIs and Microservices, and Jean Louis Vignaud from Mainframe. The video recording is not yet available, but I was able to catch one snippet in a promotional tweet – APIs enabling IAM on Mainframe

As impressive as the DevOps show by CA was, what is missing is a tighter integration between the DevOps solutions. While some rudimentary integration is in the works, really making a 1 + 1 = 3 equation will provide the enhanced value to customers that such a broad set of DevOps solutions promises. I spoke to executives from just about every DevOps-related business unit and to a person they mentioned that this was in the works. But what was pleasantly surprising was the mandate not to force tighter integration that would stunt the innovation that each of the DevOps companies brought with them when they were acquired by CA.

Of course, we will see if this remains the case. However, I did speak with employees at each of the units and they were all happy with how CA has handled the acquisitions to this point.

It is hard to argue when a software company the size of CA Technologies makes such a bold statement regarding DevOps. The company is clearly betting its future on DevOps being the backbone of the modern software factory.