Catchpoint this week announced it has acquired Webpagetest.org as part of an effort to expand use of the open source web performance testing service.

Led by Patrick Meenan, the Webpagetest service is already relied on by more than 1 million users per month to instantly run tests of websites and applications from various locations, which are surfaced via a detailed audit that can be shared with developers. 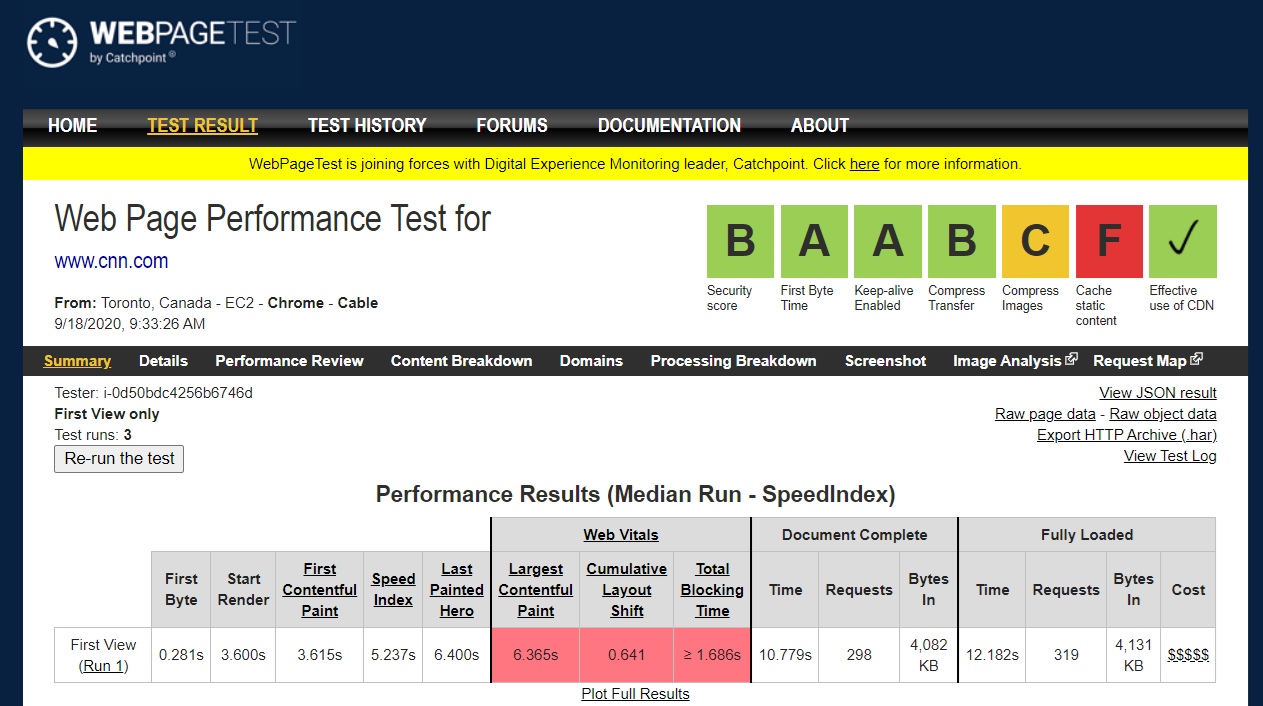 Meenan has been personally supporting Webpagetest as a side project while working for a series of IT organizations and vendors starting with America Online (AOL). Now, with Catchpoint’s acquisition of Webpagetest.org, he will have a staff of contributors as a full-time employee.

Catchpoint CEO Mehdi Daoudi said the company will also incorporate Webpagetest into the tools it provides for monitoring digital experiences. The most appealing aspect of the Webpagetest service is that, rather than focusing on individual backend platforms, it tracks the actual performance that users experience across multiple types of browsers.

Daoudi said that as organizations accelerate the rate at which they are building and deploying digital business applications in the wake of the COVID-19 pandemic, there’s now more focus on web application performance than ever. The experience any user has when accessing these applications now impacts everything from their willingness to complete a transaction to their perception of the corporate brand, he noted.

In fact, a recent survey of 200 CIOs and 200 work-from-home managers conducted in July by ReRez Research on behalf of Catchpoint finds application performance is at the top of the list of concerns (66%), followed by network reliability, work-from-home technologies and security, at 63% each. Application performance is at the top of that list because both online revenue and employee productivity are now increasingly directly impacted by the overall application experience, said Daoudi.

There’s never been a shortage of tools for testing application performance. The issue is how those tools are often employed, he noted. Too many IT organizations are monitoring individual application components rather than the actual user experience.

Organizations that focus on end user experience in the age of digital business will, in time, separate themselves from rivals that merely make applications available online. A zealous appreciation for application performance needs to be ingrained in the culture of the organization for it to ultimately succeed, Daoudi said, noting that every employee, not just the DevOps teams, needs to be aware of the impact application performance has on the business.

Performance tools that surface those issues sooner than later are invaluable in a digital age, where time now quite literally is money.

While building constructive culture, engaging workers individually and helping staff avoid burnout have always been organizationally demanding, they are intensified by the continuous, always-on notion of DevOps.  When we think of work burnout, we often think of grueling workloads and deadline pressures. But it also has to do with mismatched ... Read More
« Report: Cloud Expertise Now Superior to University Degree
DevOps Deeper Dive: IPO Frenzy Heralds Consolidation »