I have been watching the real-time regional situation reports about the coronavirus from the Chinese medical association site ncov.dxy.cn (the same site the John’s Hopkins outbreak dashboard sources its data from) closely now since very close to the beginning of the outbreak, and my daily routine has been to snapshot the regional outbreak tallies and compare the numbers with previous data to discern the trends.

The top-level executive summary is that while three nearby provinces have peaked now at around 3,000 cases of the coronavirus, the majority of the other provinces got up to a few hundred to a thousand cases. Cases are declining universally now as folks recover, and new case increases have slowed from the initial fast-spreading burst now down to a trickle outside of Hubei.

The percentage of overall cases has gradually increased in locality from its initial widespread that saw half of all cases in Hubei Province centered in Wuhan now steadily inching up to closer to 90% (above 83%) of cases being centralized in Hubei and Wuhan. Essentially, the outbreaks were sporadic in small clusters and contained in the other provinces, and the counts are all going down—a positive sign. The only place it ever really saw huge unrestrained growth was in the city of Wuhan, where new cases continue to be diagnosed, but as I mentioned above, even that has seemed to be under control now, with the rate of overall new cases in an almost-steady linearly decline for two weeks now, as presumably, the containment seems to be working. The quarantine that many experts said was unlikely to succeed is showing every indication of actually succeeding. 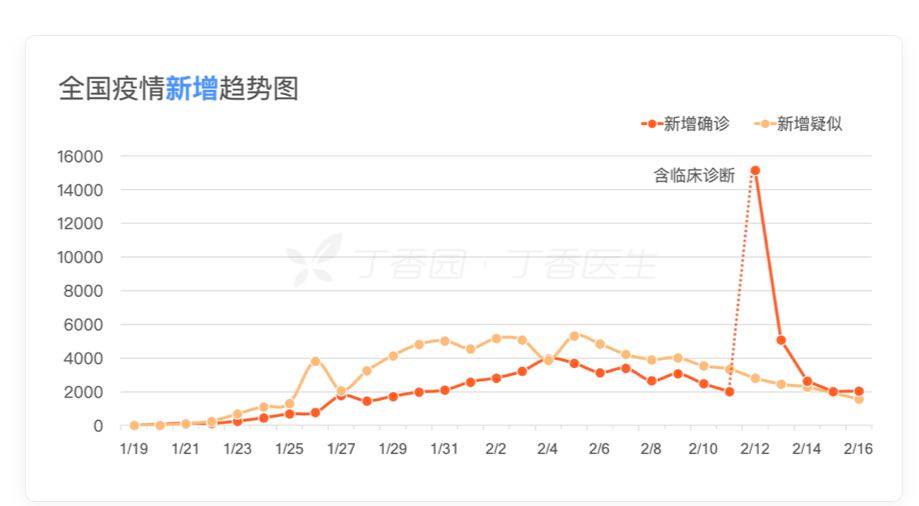 The graph above IMHO best describes the progression of the coronavirus. Ignore the big spike—that was a numeric anomaly from the redefinition of “clinically prescribed” cases situations where patients had pneumonia symptoms but test swabs indicated negative for the virus, presumably where health officials cleared the virus and only the symptoms from the induced pneumonia remains. They redefined the counting criteria and classification so that those patients could access care facilities, which is why the graph seems to spike—though this bureaucratic anomaly caused undue panic in many folks observing the numbers before the Chinese-language information about this redefinition reason percolated out and was translated as an explanation to international media. Overall, this graph illustrates what I saw from the regional counts: There was an initial rapid ramp up and then containment and a slow, steady decline in new case increases. The yellow line is suspected cases and the red line is confirmed tested cases. As you would expect, the suspected numbers led the confirmations by around a day.

The situation right now is that really the only place case counts of the coronavirus are increasing is in Wuhan itself, with the greatest density of cases. Starting one to two weeks ago the cases rates finished their rapid expansion in the other provinces and began their long, slow, steady decline as patients recover, with a small number of fatalities. New cases seem to be fairly limited small clusters of one to 10 cases and isolated, as well as declining for weeks now.

Internationally, the only trouble spot is the quarantined cruise ship in Japan, which seems to be acting as an incubator. I can tell you a lot about that ship because one of my co-workers’ parents are on board and I’ve been getting first-hand reports of what is going on. After a burst of cases last week on the ship, those in charge have fortunately decided to disembark the ship to national quarantine facilities set up by the passenger’s origin governments. This is good because conditions aboard were becoming pretty miserable, entertainment was limited and unlocking the porn and movie channels did little to appease the occupants, who were becoming frustrated with the limited food choices in particular. It was a terrible time for the staff—essentially on a jail ship forced to feed and the occupants. I’m told disembarking is due to begin over the next few days.

Outside China, excepting the cruise, there were relatively few cases of non-direct secondary infection of the coronavirus that weren’t directly linked to someone who had been in Wuhan or in contact with someone from Wuhan. There were a few clusters of infection, particularly in one Hong Kong apartment building and another one in Singapore, but pretty much all the cases were primary contact up until now, so it seems international diligence and containment is holding.

There is plenty for folks to be diligent about, but for now, there seems very little to panic about and every indication that this impossible quarantine is going to be studied as a model of how to respond in the future.

Let me also pre-empt the inevitable distrust of the Chinese government some folks have to mention that the inevitable conspiracy fear-mongering and panic you see being spread in paranoid YouTube rants and misrepresentation clickbait is completely unfounded from the data and news sources I monitor. To quote a WHO press conference, “The Chinese authorities have shown exceptional transparency and openness in this outbreak.” Another expert I heard on the radio who worked on the earlier SARS outbreak noted that one of the key lessons learned in that incident was the importance of rapid and accurate information dissemination to control and respond to infection outbreaks, and the Chinese medical association seems to have taken this lesson to heart to not repeat those missteps with the coronavirus. The fact that I was able to monitor regional situation reports over the last two months is a clear indication of that.

The folks who feel that somehow the Chinese government is sandbagging the numbers and the problem may be worse than indicated aren’t really acknowledging the stupidity of such a fiction. Misrepresenting the situation to their own medical professionals combatting the outbreak would not only be irresponsible and dangerous but also extremely unlikely and infeasible. There is little incentive to misreport, and such a fiction would need to involve concerted action from hundreds of thousands of medical professionals—and likely beyond the capabilities of even the Chinese bureaucracy; in the end, their government is as clumsy and bumbling as ours and it would require far too widespread a meddling to maintain consistency. The Chinese censors can stomp down and suppress anything that makes the bureaucrats jumpy, but it is likely incapable of producing such a coherent fiction across so many sources, sites and reports as would be required to fulfill the paranoid fantasies of wary folks. Not only is there no motive or gain, but there is also likely a huge disincentive and probably penalty for misreporting and misrepresentation, if the rapid fall from grace and dismissal of the bureaucrats who made the initial mistake and sandbagging of the numbers that led to the initial outbreak is any indication. As a matter of fact, the only indication I’ve seen with any substantive evidence of government information suppression was the blocking of the online lynch mobs for those bureaucrats who were at fault for the doctor who sounded the alarm’s arrest after that doctor tragically died. Anyone who would dare tamper with the numbers likely would face the same fate.

There is by definition underreporting as the visibility to cases of the coronavirus with very mild symptoms or test errors or any number of other anomalies in mass counts, but the numbers from a macro level look promising.

Overall, I’m relieved to see that the situation is resolving with only sporadic and isolated lapses in containment—there were only ever 85 cases internationally outside of Asia with a single fatality. That number is down to 52 now as folks recover and no recorded incidents of secondary infection without direct contact with a traveler from Wuhan. The mortality rate statistic is ever sinking as patients among the roughly 60,000 cases cumulatively diagnosed recover, and it’s proving to be primarily a threat to the elderly, though interestingly I’ve seen reports that few children seem to be affected.

Later next week we should see the results from the clinical study of the cocktail of repurposed HIV antivirals that showed such great promise in simulations and early tests that had some severe patients recover in as little as two days. The study was rolled out in amazingly rapid fashion and the medical community seems to have focused on combatting this new disease with a vengeance—supposedly vaccine trials are to begin as early as next month.

Vigilance and wariness are due, but at this time there seems to be no cause to panic, forward panic or feed conspiracy fears preying on phobias about diseases or likely even change any day-to-day activity or future plans for folks outside of China regarding the coronavirus. The estimate from current numbers is placing the potential of the quarantine lift at the beginning of April in the only forecast I have seen.

The entire CI/CD/ARA market has been in flux almost since its inception. No sooner did we find a solution to a given problem than a better idea came along. The level of change has been intensified by increasing use, which has driven changes to underlying tools. Changes in infrastructure, such ... Read More
« What Makes Digital Transformation a Success?
Veeam Updates Backup and Recovery Platform »