Home » Features » What are the most critical DevOps Tools?

What are the most critical DevOps tools categories? According to the results of a new survey by CA Technologies the answers may be surprising. That is just one of the insights reported on. The survey results and report are chock full of other great insights about DevOps usage as well.

The survey shows that a staggering 88% of respondents either are already utilizing or expect to be utilizing DevOps within the next 5 years.  The over 1400 respondents to the survey represented IT or line of business executives and is a significant increase over last years 66% response rate. This would certainly indicate that DevOps is crossing over in the mainstream and is no longer solely in the realm of early adopters and visionaries.

So according to the study what are the most critical DevOps tools? 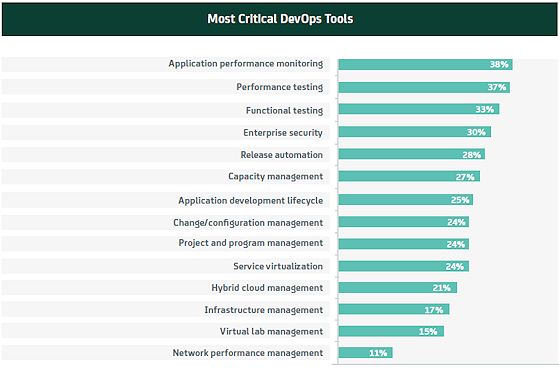 APM as the most critical? It is a popular segment with players like New Relic, App Dynamics, Dynatrace (Compuware) and CA to name a few. But I thought that change/configuration management which would include Chef and Puppet would be number 1. Also performance testing and functional testing were 2nd and 3rd. Could this be a case of categories CA plays in being over emphasized, the “everything looks like a hammer to a nail syndrome”?  I don’t know, but the numbers speak for themselves. I was happy to see enterprise security coming in 4th on the list (another area CA plays in).  Bringing up the rear at only 11% was network performance management. I think that may have a lot to do with the fact that with the rise of the cloud, so many organizations are less invested about network as the cloud and Internet has replaced much of the internal LAN.

I spoke to Andi Mann, VP in the CTO’s office at CA and a frequent contributor to DevOps.com about the survey. Andi said that it is re-enforcement that despite all of the talk about DevOps being about culture, we should not forget that it is about tools as well.

So what are the reasons given for this massive adoption statistic. What are the perceived benefits and reasons driving DevOps adoption?  According to the survey results:

As can be seen over 40% cited improved quality and performance of applications as the driver for DevOps.  For those who wonder about whether you can have increased speed only at the expense of quality, this would seem to show that you can have both with DevOps. Perhaps equally as rewarding was the 2nd most popular response, improving the end customer experience.

In any case with 88% of respondents on board with DevOps, one thing is for sure, DevOps is the worst kept secret in IT. However, let’s not paint an overly rosy picture. Not every DevOps effort succeeds. What are the biggest obstacles to DevOps adoption? Again the survey says: 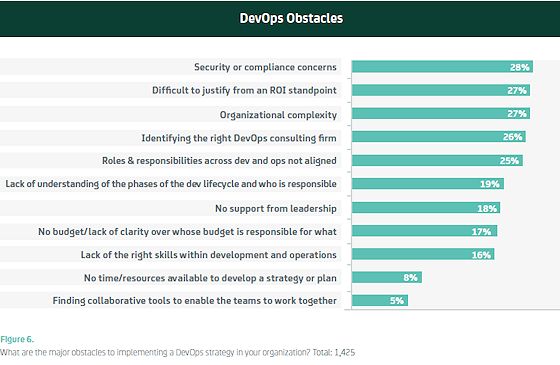 So while enterprise security is a big benefit for adopting DevOps, security and compliance concerns are the biggest obstacles to DevOps adoption as well. I guess that is the Jekyll and Hyde nature of security? I don’t buy the ROI being difficult to justify. Most DevOps examples I have seen show a clear positive ROI.  Identifying the right DevOps consultant firm?  I don’t know about that one either. But then again I am bullish on DevOps, so I may be as guilty of the “hammer looks like a nail” as anyone.  I am surprised though that under obstacles we didn’t see that our culture is not trusting or some other culture related reason.

You should go have a look at the survey yourself as there are other good insights there. In the meantime here is another indicator of just how deep DevOps is penetrating the IT market.

« When the bad guys use DevOps, you need DevOps to defend yourself
Chuck Norris doesn’t need DevOps Contest »