IBM this week announced its intention to spin out a new company next year focused primarily on managed infrastructure as part of a plan to focus more on hybrid cloud computing and artificial intelligence (AI) initiatives.

IBM is combining the Red Hat assets it gained last year via a $34 billion acquisition with its investment in Watson AI technologies, while an as-yet-unnamed company will assume control over IBM outsourcing services currently provided by the Managed Infrastructure Services unit of IBM’s Global Technology Services division.

IBM CEO Arvind Krishna, appointed last April, on a conference call with analysts said IBM will primarily focus on high-growth opportunities driven by Red Hat OpenShift, Linux, Kubernetes, containers and DevSecOps software technologies that will drive a trillion-dollar hybrid cloud computing opportunity, while the new company will become the world’s largest IT services provider with more than 90,000 employees serving a base of more than 4,600 clients generating more than $19 billion in revenue. Today IBM generates a little more than half of its revenue from those services and claims to have a services backlog of $60 billion.

The new approach will enable IBM to “maniacally focus” on hybrid cloud computing and AI opportunities, Krishna said. That shift will also create a separate company capable of generating double-digit growth that should result in a higher stock valuation at a time when investors are pouring billions of dollars into software companies. IBM this week disclosed it has 2,400 hybrid cloud platform clients and that the number of larger deals driven by Red Hat software has increased by a factor of two.

To achieve its financial engineering goal, IBM will incur multiple charges, including $2.5 billion to spin out the new company and another $2.3 billion to set it up.

IBM has a long history of spinning out companies. In its new form, the company will grow both organically and inorganically as it makes additional acquisitions, noted Krishna.

The “new” IBM will look and feel a lot more like Red Hat than it will IBM prior to its acquisition of Red Hat, said Mitch Ashley, CEO and managing analyst of Accelerated Strategies Group (ASG). 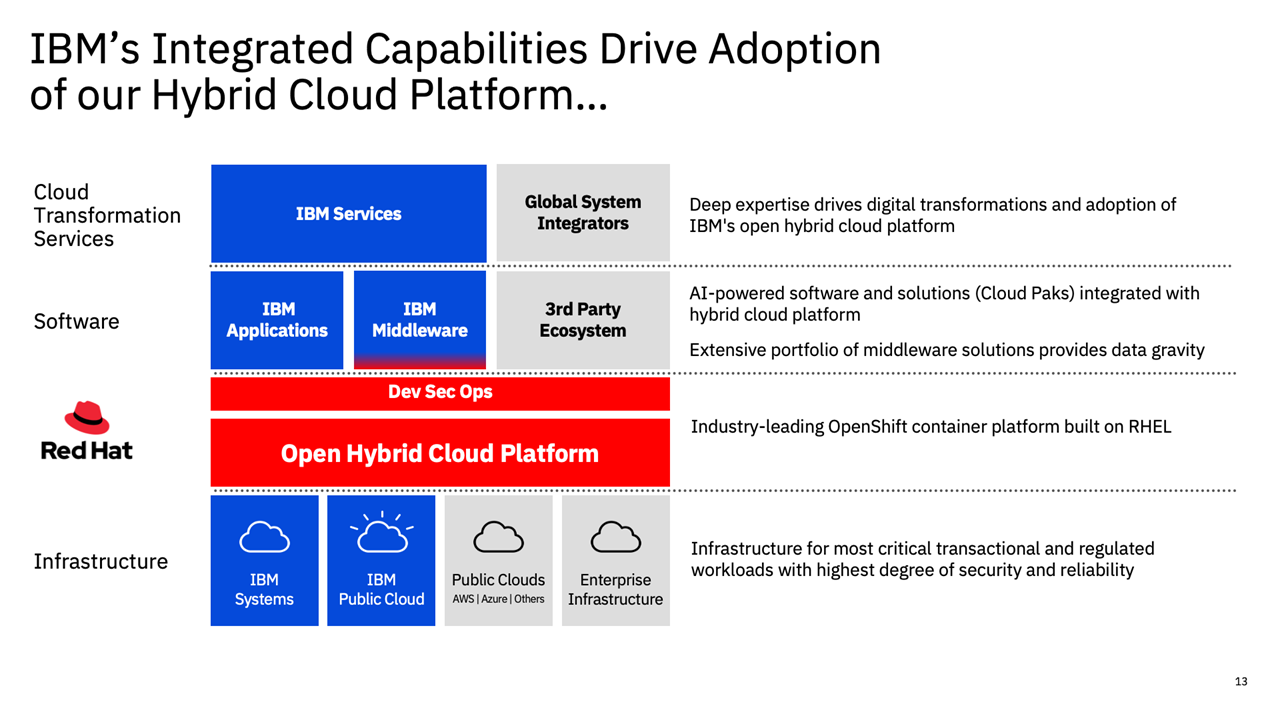 The degree to which IBM will be able to dominate hybrid cloud computing is unclear. IBM is making case for unifying the management of IT by standardizing on the Red Hat OpenShift platform based on Kubernetes that can be deployed on any public cloud or on-premises IT environments, including those that also house mainframes and x86 servers. In the wake of the economic downturn brought on by the COVID-19 pandemic, the rate at which IT organizations are expected to reduce costs by centralizing the management of cloud computing platforms is expected to increase.

Adoption of multiple cloud computing platforms in the enterprise has tended to be reactive and any effort to centralize the management of those platforms is still in the planning stages, said Judith Hurwitz, president and CEO of Hurwitz and Associates, a research and consulting firm.

Ultimately, however, IT teams will have multiple options to choose from that don’t necessarily require them to adopt the Red Hat OpenShift platform.

Similarly, IT organizations have access to a wide array of open source AI frameworks via cloud services that provide alternatives to Watson offerings.

In the meantime, the rate at which organizations are transitioning to hybrid cloud and AI platforms is increasing. The issue IBM will need to contend with is making sure it doesn’t become distracted by its own internal issues over the course of the divestiture, which might take well over a year to ultimately complete.

Open source components have become an integral part of today’s software applications — it’s impossible to keep up with the hectic pace of release cycles without them. As open source usage continues to grow, so does the number of eyes focused on open source security research, resulting in a record-breaking ... Read More
« Feature Flags: The Cure for DevOps Remote Work Stress
Bringing DevOps to SAP, With Basis Technologies »