Patch management has been a thorn in IT’s side for decades. While it is undeniably necessary for security and stability purposes, the staggering array of patches that are available make managing them effectively nearly a full-time job – or a job better left to users. Few IT professionals want to be the “patch person,” and yet, nearly all IT professionals want their systems protected by the latest patches. No one wants to find out an intrusion was easily preventable via patching. It goes without saying that the SolarWinds attack has left quite a few IT departments scrambling for an alternate solution.

The world of patch management has gone through several evolutions that we won’t cover in much detail here. Instead, we’ll focus on what’s available, what you should look for and where the market is headed. Suffice it to say that patch management as a practice has grown from an individual applying patches to servers and server apps while employees were encouraged to patch their equipment, to complex systems that manage the patching themselves, with IT oversight. Currently, patch management is often bundled with endpoint management, simply because many of the patches are going to end points (user machines and devices).

Out of this growth have come several market differentiators that you should be aware of when looking into a way to manage the avalanche of updates the average organization is seeing.

Once the system is chosen and worked into your DevSecOps environment, updates will be more responsive, which leaves one more thing to consider – does it feed into your agile tools? If the update management tool notifies a project management tool like JIRA when it updates a server, then if code on the server breaks, the developers aren’t in the dark about changes, and will have breadcrumbs to help them track down the source of the problem.

Imagine if manual updates became a rarity instead of the norm. There is a cost associated with this process, but most of the products on the market can be had for a reasonable price – if you waste a couple hours a month (or for some products, a year) on updating, they’re paying for themselves. Of course, your time is a sunk cost, and the cost of these is an operational cost, so there is an evaluation your organization will have to undertake. Given how busy everyone in DevOps and DevSecOps is, it is likely worth the investment for all but over-staffed organizations. What? There are a few!

Find what suits your organization, and put it to use. Faster updates, less time investment. The idea is sound, you just need to figure out what suits your needs. And keep rocking it. You are managing updates already, this is just a way to make your life easier. And we could all use a bit of easier in a busy, complex IT environment. 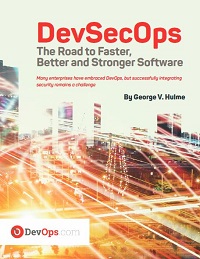 DevSecOps The Road to Faster, Better and Stronger Software

If the road to DevOps is hard, the road to DevSecOps is certainly more difficult. Still, more organizations have embraced DevOps as their road map for driving their business-technology efforts forward. Many report delivering more applications more rapidly to market, and they say their customers and users appreciate more timely ... Read More
« Evaluation Forms
TigerGraph Raises $105 Million to Accelerate Graph Analytics on the Cloud »