Every year developers gather in San Jose for Apple’s annual WWDC, where software quality is typically a key point of discussion. This year, the company progressed from its 2017 buggy software debacle in full force—it’s a heads-on effort, marked by the industry leader naming 2018 its year of software quality.

This raises some larger questions around the software industry itself. Has modern IT become so complex that the concept of “bug-free” software is no longer realistic, particularly for a company the size and scale of Apple? Or did Apple recognize this pain point and shift its focus to  software quality in an effort to be the harbinger of change?Of course Apple isn’t alone when it comes to the struggle with quality. Buggy software from organizations across the board persists today, but it simply cannot be ignored. Poor quality software creates long-term effects of waning customer confidence, brand erosion and revenue loss. These are very real concerns for the entire C-suite. Quality is no longer an issue limited to Dev or Ops—it’s critical to every organization’s success.For example, consider the fact that 88 percent of consumers say they’d abandon an app if they encountered bugs or glitches (source: QualiTest). Nearly half those people are likely to discontinue using an app entirely if they experienced a bug every day. And 32 percent say they would abandon an app the moment they encountered a glitch.The cost of acquiring a new customer is 5 to 25 times higher than retaining an existing one. Getting software right the first time through a culture of continuous testing is critical to every business, as it translates directly to retaining customers.

Budgets for QA and testing are expected to rise to 40 percent in 2019 from 31 percent this year. However, one-third of developers still admit they don’t have enough time to properly test before software deployments. As everyone in this business knows, developers run fast. It is of the utmost importance to ensure software actually works well and will provide the expected customer experience. The garbage in, garbage out model is not an option. To fill the gap, more and more organizations are turning to automated testing. 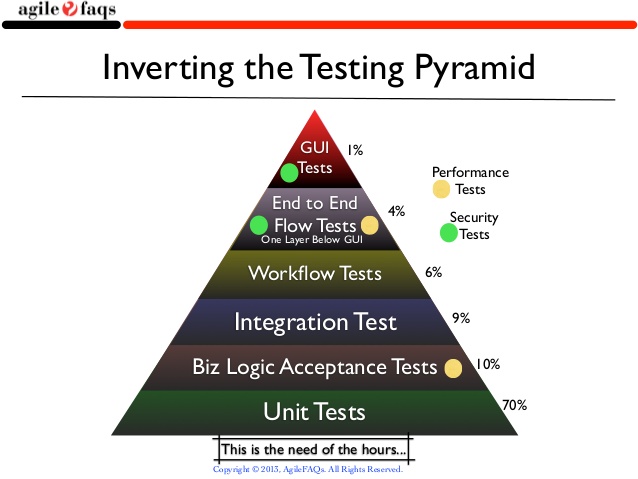 Any repetitive, labor-intensive task is typically a good candidate for automation, including those associated with testing. Automated testing involves execution of prescripted tests on a web or mobile app, with test data accessible in detailed reports to help development teams quickly identify issues in the code, as well as any issues in the automated scripts themselves.

Performance of the automation framework and its scripts is crucial, and should be a high area of focus. Prescripted tests fall into different categories that comprise the test pyramid. They include:

Once created, automated tests can be run again and again at no additional cost—which is particularly helpful when source code is changed. Since it is much faster compared to manual testing, automated testing translates into considerable time and cost savings.

Automated testing is especially valuable given the breadth of browsers, operating systems and devices in the marketplace. Consumers today run apps on a countless number of these, so developers must have access to every combination imaginable to deliver the highest level of performance. What good is your app if it doesn’t run (and, by extension, monetize) properly when it gains popularity in some part of the world with users on a different platform from the one you tested on?

Ensuring that software works on as many options as possible allows a business to reach a maximum number of users. This is where automated testing can help, by executing thousands of different complex test cases during every test run. Testing efficiency can be achieved by executing tests in parallel or grid, and executing CI/CD jobs in parallel. For example, one code is deployed in staging, teams can simultaneously start jobs to test against browsers and cross-browsers, apps and localizations, etc. The result is attaining coverage that would be impossible through manual tests. Teams can scale apps fast, maximize CI/CD workflows, and ship higher quality software faster.

Attaining CI/CD and automating all the tasks involved in creating a real-time test system is one of the arenas in which the next big software battle will be fought. More importantly, as software continues to eat the world, the C-Suite can no longer ignore the impact of poor quality software devouring your business. Apple’s bold step of identifying 2018 as the year of software quality is a call for other organizations to do the same.Automated testing is a key piece of the solution. How is your organization meeting the software quality challenge, and by extension, the evolving standards of customer experience?

While building constructive culture, engaging workers individually and helping staff avoid burnout have always been organizationally demanding, they are intensified by the continuous, always-on notion of DevOps.  When we think of work burnout, we often think of grueling workloads and deadline pressures. But it also has to do with mismatched ... Read More
« Electric Cloud Applies Machine Learning to DevOps
SUSE Preps Independent DevOps Path »