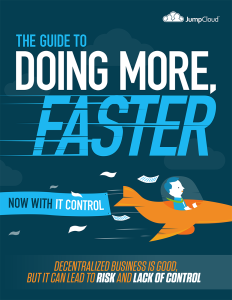 My friends at JumpCloud asked me to contribute to an Ebook they wrote on “Doing More Faster now with IT control”. The idea was to take the concept made famous by David Cohen and Brad Feld in a book and as the mantra for Techstars and apply it specifically to IT.  I was part of an all star team, each assigned to write a section.  Gene Kim, Ben Kepes, Tony Bradley and Raj Bhargava each contributed. My section is on BYOD.  Gene Kim writes about DevOps (no surprise there), Ben writes about hybrid organizations.

But I don’t write this article to blow my own horn about writing a chapter in a book (maybe just a little). Rather I read Brad Feld’s blog post on it today and as much of what Brad writes, it made me think. As Brad said doing more faster generally is a good thing. But as the saying goes, “speed kills”. Going faster can spawn a cascade of other issues. Dealing with them is often the key to success. On that note Brad calls out three things about organizations who successfully do more faster:

In terms of DevOps, isn’t in many ways the idea of doing more faster core to it? So to me doing more faster is as much a mantra in DevOps as it is at Techstars. I don’t know the idea that IT wants to do more faster is just natural to me.  But again on Brad’s blog I was reminded that is not the belief of everyone.  There was one comment on the blog when I read it today:

Does IT matter? 🙂
IT has been outsourcing and offshoring itself for the past 15 years, and that trend is on-going.
“Fast” and IT are oxymorons. But if there is hope, that’s great.

I read this comment and it occurred to me. This fellow is pretty sour on IT.  While I think we are living in a golden age of IT and technology, there are some who believe that IT is slow non-responsive and “outsourcing and offshoring itself for the past 15 years.”   My first reaction is do you still think we are off-shoring and outsourcing so much? To me that pendulum has already swung back.  Then I thought even if didn’t what difference does it make?  If you are having development done off shore or outsourced does that slow you down? Does it prevent you from doing more faster?

One of the benefits of trends like DevOps is that we are doing less outsourcing I think. But really is fast and IT an oxymoron?  What IT team abused this poor fellow?  I just don’t get it.  Am I missing something or just living in a bubble?  What do you think?

In the meantime, you can download and read the ebook yourself from: http://go.jumpcloud.com/it-decentralization-doing-more-faster.html