Micronaut, a provider of a framework for building applications based on microservices and serverless computing platforms, today revealed it is allying with Moderne, a provider of a tool for refactoring code, to create a “recipe” that will automatically update the Micronaut framework.

Moderne CEO Jonathan Schneider said the open source OpenRewrite refactoring tool for code, originally developed at Netflix, makes it possible to automate updates to codebases, remediate vulnerabilities and provide a foundation for high-level building blocks that will make authoring custom transformations simpler. That approach will eventually be embraced by other providers of application development frameworks.

Fresh from raising $4.7 million in initial funding, Moderne makes OpenRewrite available via a software-as-a-service (SaaS) platform to enable IT teams to search and transform millions of lines of code in minutes. OpenRewrite currently supports Java, but the company is working toward adding support for additional languages, including infrastructure-as-code (IaC) tools such as Kubernetes, YAML and XML.

Moderne has also developed “recipes” for common search and refactoring operations that can be assembled into more complex recipes for framework migrations involving, for example, an upgrade from Java 8 to Java 11. Micronaut is the first provider of a development framework to create a recipe for its own framework using OpenRewrite. 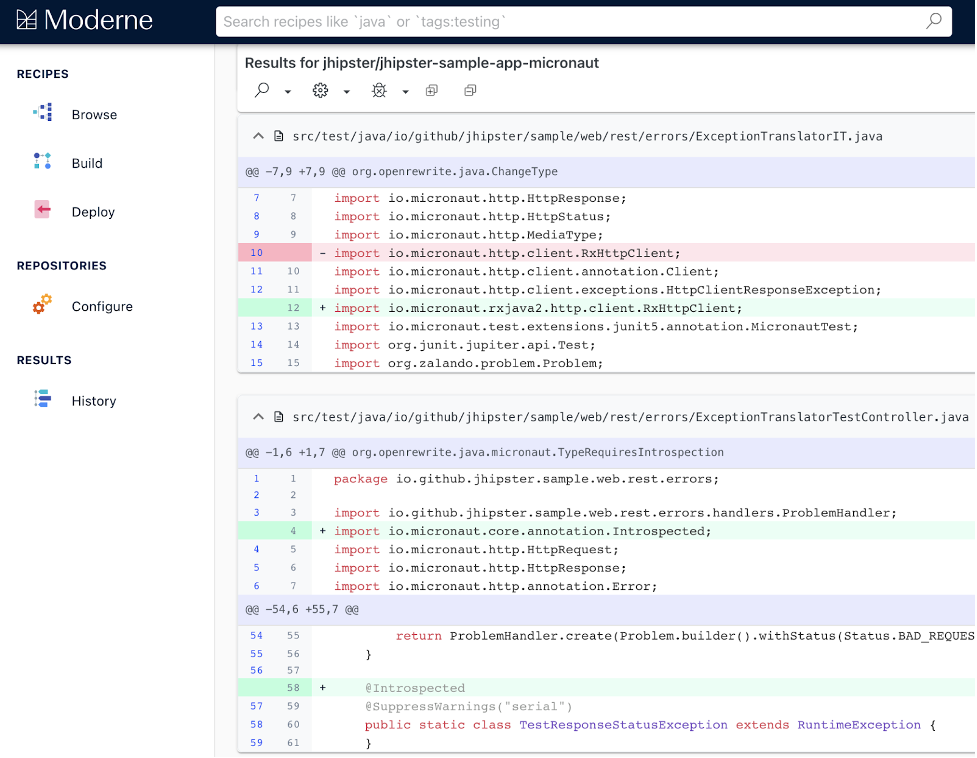 At a time when applications are more distributed than ever, updating codebases is a major challenge. In fact, the manual effort involved in making those migrations is one of the primary reasons many organizations continue to employ older versions of frameworks such as Java 8. OpenRewrite is designed to automate that process at scale in a way that leaves it up to the individual developer to determine how involved they want or be or if they simply prefer to have a DevOps team manage the upgrade process on their behalf, said Schneider.

In the longer term, Schneider said he expects recipes will be created to address everything from mass migrations to remediating specific types of vulnerabilities across an entire codebase.

Too much reliance on legacy development frameworks generally stymies innovation. The latest versions of Java, for example, are designed to make it simpler for developers to build microservices-based applications.

It remains to be seen to what degree DevOps teams will embrace automation to upgrade code. Many developers are hesitant to rely on automated tools of any kind. However, given the need for most developers to spend more time writing new code, it’s only a matter of time before most of them come to terms with automated approaches to updating existing code.

In the meantime, the cost of supporting legacy frameworks should decline as organizations begin to migrate their codebases faster. One of the reasons there is so much technical debt in the enterprise is because different development teams tend to adopt different framework versions at different times. DevOps teams can find themselves being asked to simultaneously support multiple versions of the same framework. There may always be multiple versions of those frameworks, but, over time, DevOps teams should eventually see the bulk of deployed applications all using the same framework as the upgrade cycle becomes more automated.

No matter where you are in your hybrid cloud journey, security is a big concern. Hybrid cloud security vulnerabilities typically take the form of loss of resource oversight and control, including unsanctioned public cloud use, lack of visibility into resources, inadequate change control, poor configuration management, and ineffective access controls ... Read More
« How to Prepare Your DevOps Environment for DevSecOps
Career Growth »