Red Hat today announced it has extended the analytics capabilities it makes available for instances of the Ansible IT automation platform and has made the Ansible Automation Services Catalog now generally available.

In addition, Red Hat has increased the number of certified playbooks it makes available from both the company and third-party partners within the Ansible Content Collections. That repository now houses more than 1,200 certified Ansible Modules.

Announced prior to the Red Hat Summit, which is taking place online this week, these offerings are part of a series of cloud services the company has developed to foster the adoption of Ansible to automate a wide range of processes.

Tom Anderson, vice president for the Red Hat Ansible Automation Platform at Red Hat, said that as Ansible is employed to automate more IT processes, more IT teams want to better understand how the playbooks being created using Ansible are being used within their organizations. The latest updates to the Ansible Analytics module add the ability to filter analysis by Red Hat Ansible Tower cluster, by date and between organizations. IT teams can also discover job statistics by total runs, total time, average time, success rate, most failed tasks and the failure percentage of that task.

At the same time, the Ansible Services Catalog makes it easier to access curated playbooks that have been vetted thoroughly, he said. 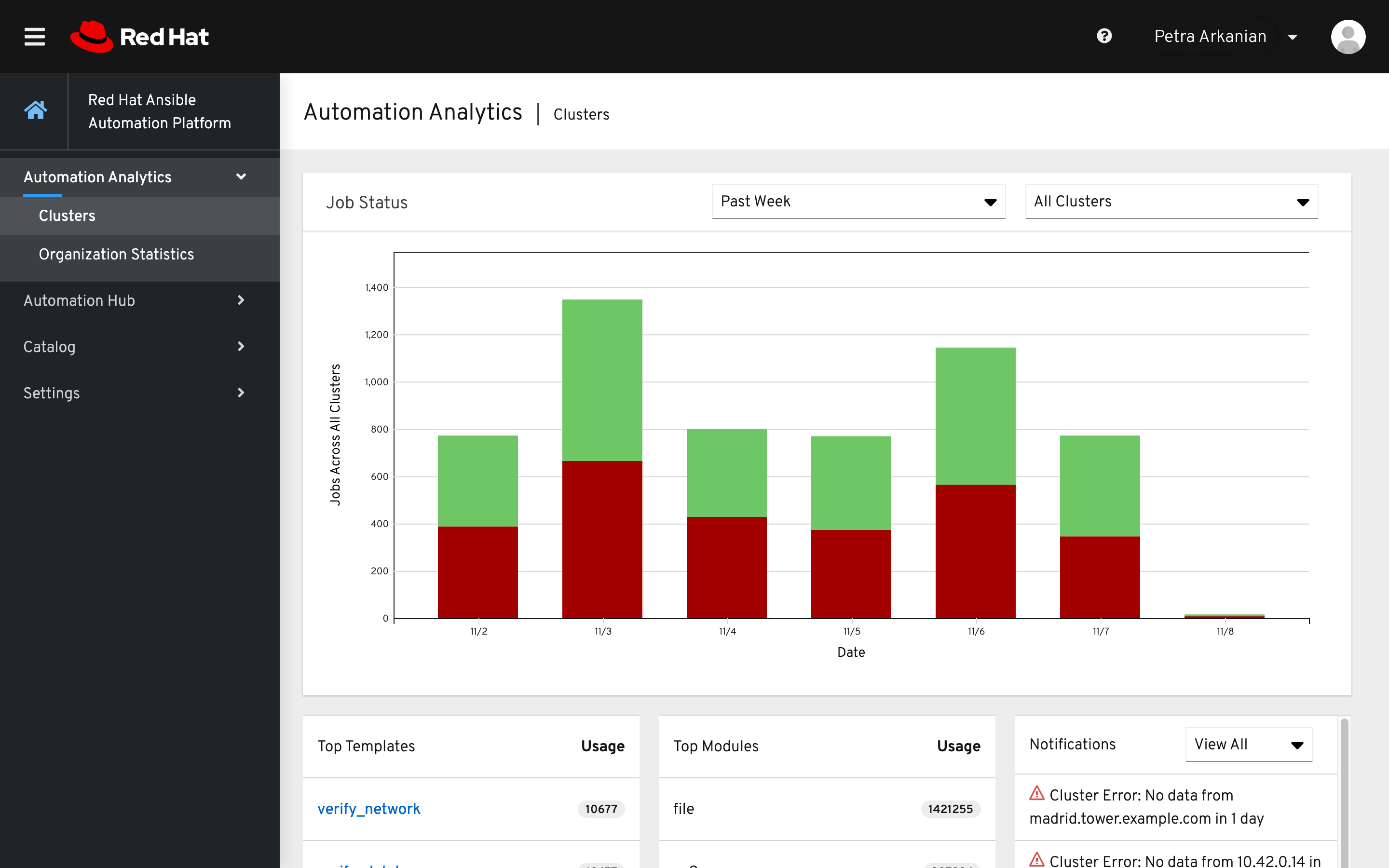 Anderson noted Ansible continues to gain traction because it provides a declarative approach to automating IT processes that can span multiple platforms. Interest in automation has increased substantially in the last several years. The challenge that many organizations now face is that as various providers of platforms have made IT automation tools available, organizations now are managing multiple islands of automation, he said, adding Ansible provides a means to unify IT automation under a common open source framework.

The pace at which organizations have been automating the management of IT is expected to increase substantially in the weeks and months ahead. In the wake of the economic downturn brought on by the COVID-19 pandemic, organizations that are reducing IT staff will look to automate processes to enable the remaining IT employees to manage more efficiently IT environments that continue to grow in size and complexity.

That increased reliance on automation should also advance adoption of best DevOps practices, as more IT operations teams embrace managing IT infrastructure as code.

Ansible, of course, is not the only platform capable of automating IT processes. However, because of its reliance on a declarative approach, Ansible is more accessible to IT operations staff who lack programming skills. In theory, DevOps teams are increasingly taking control over the management of IT infrastructure using programmatic tools. However, there are still many IT organizations that prefer to have access to IT infrastructure centrally managed by IT operations teams that typically make resources available to developers via a self-service portal. However, while there may be a debate over who will automate IT processes, the one thing everyone does agree on is the time to do so is now more than ever.

The entire CI/CD/ARA market has been in flux almost since its inception. No sooner did we find a solution to a given problem than a better idea came along. The level of change has been intensified by increasing use, which has driven changes to underlying tools. Changes in infrastructure, such ... Read More
« Report Finds Much Room for CD Improvement
Commvault Deepens Ties With NetApp to Automate Data Protection »