SolarWinds has updated its application performance management (APM) platform to provide more visibility into the IT infrastructure on which applications depend.

Jim Hansen, vice president of products for application management at SolarWinds, said the AppOptics service map within SolarWinds APM Suite now enables DevOps teams to visualize dynamic relationships between services and their dependencies. IT teams can view metrics such as average latency, requests per minute, error rate and CPU usage as time series data within a service trace topology.

DevOps teams can view which services and dependencies are causing resource constraints, surface unknown dependencies and misconfigurations in services and determine how business transactions are flowing across application services, said Hansen. The goal is to make it easier to conduct root cause analysis at a time when the dependencies between software and infrastructure have never been greater or complex. 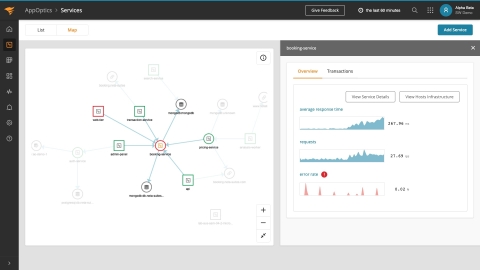 Hansen noted that in the wake of the economic downturn brought on by the COVID-19 pandemic there is a lot more interest in reducing the total cost of IT. In many cases, IT teams today are relying on separate tools to monitor applications and IT infrastructure, which often not only results in higher costs but also fails to provide enough context, he said.

At the same time, responsibilities within IT teams are converging. According to a recent survey of 227 IT professionals in North America conducted by SolarWinds, 54% of respondents said they are spending more time managing applications and services than infrastructure and hardware. The survey also notes there are more IT teams than ever using log analytics (58%) and tracing (24%).

SolarWinds has also added a web transaction recorder to its Pingdom monitoring tool to capture how an end user interacts with a web application without requiring developers to write and deploy scripts. The recorder captures each step made during a transaction and automatically translates the information into a script that can automatically play back, said Hansen.

Finally. SolarWinds has enhanced its Loggly tool, adding the ability to automate indexing and parsing to deliver time to value faster, he said.

Hansen said SolarWinds via its software-as-a-service (SaaS) platform, is trying to make APM simultaneously more affordable and accessible. The challenge is making it possible for IT teams to apply APM services more broadly even when consumption of those services scales up and down in ways that are not always predictable, noted Hansen.

There are no shortages of options when it comes to APM platforms these days, and most are accessed via SaaS platforms. SolarWinds has been making the case for an APM service that costs substantially less than rivals while providing most of the functionality required by the average IT team. Many teams have limited their adoption of APM platforms to only their most mission-critical because of the cost involved. As APM services become more affordable, there should be a corresponding increase in reliance on APM services at a time when IT is becoming more complex to manage daily.