Home » Features » Strengthen API Security With These Tips and Patterns

If you haven’t noticed, digital organizations are building more and more APIs. ProgrammableWeb tracks more than 23,000 public web APIs at the time of writing, and the API market is estimated to be worth $5.1 billion by 2023. Building with APIs increases internal interoperability, reduces development time and can extend product functionality tremendously. In short, the value of APIs is rising. However, opening up with APIs brings security caveats that, if not addressed, could result in serious breaches that negate these benefits.

I recently spoke with Roey Eliyahu of Salt Security to get his take on the top security concerns for API-enabled companies, and how organizations can safeguard their services. In short, he recommends thoroughly cataloging and understanding your API inventory, designing for legal challenges and mitigating OWASP’s top 10 API security vulnerabilities.

APIs have been called “the next frontier in cybercrime.” Rightly so, as API breaches continue to pop up nearly every day. Take the recent API vulnerabilities at Cisco Systems, Shopify, Facebook, U.S. presidential campaign apps, and GCP as evidence. The most infamous was likely the Equifax breach—not enforcing formats on incoming API calls resulted in a massive data breach, which cost the company a $700 million lawsuit.

So, why have API breaches increased recently? Well, a few years ago, there were simply fewer APIs. And, these older services exposed less sensitive data. Nowadays, companies typically have many more APIs. Banking applications, for example, might expose hundreds of highly valuable endpoints that are very appealing to hackers.

Companies also build APIs for different audiences: A 2020 study by SmartBear found 72% of companies develop both internal and external-facing APIs. These APIs could easily hold hundreds of parameters, and with every new method added, a company’s potential attack surface grows considerably.

To mitigate the above API security issues, Eliyahu suggested three main steps: Understand your API inventory, audit against privacy policies and data privacy regulations, and track the most pressing API vulnerabilities like a hawk.

“You need a great inventory of APIs to know your attack surface,” said Eliyahu. Many API providers document their APIs with OpenAPI definitions. But, these files don’t always match the production realities—they may be manually generated or leave out certain methods. “In every organization, there is up to a 40% gap between APIs that are actually deployed versus what has been inventoried,” he said. By maintaining a clearer API inventory, organizations can avoid unprotected shadow IT.

A change to an API could result in a change in how it collects user information. Updates involving sensitive data could break privacy policies or regulations such as GDPR. “After you have an inventory, you need to map all parameters manually,” said Eliyahu. He recommended performing a legal audit against your API inventory and establishing a repeatable testing process that plugs into a continuous delivery pipeline.

As API teams release new updates, they must consider security and legal implications earlier on in the development flow. “Now, with CI/CD, these changes have to happen very frequently,” he noted.

There are many known API security gaps. For example, there may not be proper authorization in place, keys could be exposed, unexpired tokens could be hijacked and so on. Thankfully, OWASP has compiled a resource of top API security vulnerabilities, which Eliyahu and many others in the API economy have rallied behind. “The world should move to adopt the OWASP issues,” he said. These vulnerabilities are as follows:

Using AI To Go Beyond ‘Whac-A-Mole’

Plugging these above holes is a good start. However, these are only defensive measures against known patterns; they aren’t helping you keep guard for nuanced attack types. Ideally, security systems should stop cyberattacks before they even get started.

Yet, Eliyahu recognizes a big gap in how APIs are monitored. Organizations “don’t have proper tools to know who is looking for vulnerabilities,” he said. “Tools are typically not that advanced. They mainly look for injections and known patterns.”

Imagine a hacker probing an API. They will likely do so by trial and error, testing undocumented endpoints, sending malformed requests and so on. “They need to probe for hours or days before they find something,” said Eliyahu. If an AI could detect these odd attempts in minutes or seconds, IT could significantly reduce risk.

Security solutions should thus leverage big data and AI to create baselines of typical behavior, then deter malicious activity the millisecond any nefarious probing begins. Eliyahu said such a security AI must consider dozens of behaviors such as, How is the API being accessed? What parameters are being used? What are the relationships between parameters? What is the flow of API calls? What type of data can be exposed?

Instead of waiting for a breach to occur, an AI-enabled API security monitoring could instantly pause behavior deemed “out of the norm” by referencing a knowledge base that’s constantly refined using machine learning. Because, if you are only blocking malicious actors without knowing how you need to improve API security posture, “you are just playing Whac-A-Mole,” said Eliyahu.

Mark O’Neil, analysis at Gartner, predicted that by 2021, 25% of organizations with public APIs will have discontinued or rebooted their public API strategy, citing security concerns as a common breaking point. APIs are now at the core of many application developments. Yet, without the proper DevSec proposition, teams risk wasted efforts and costly breaches.

To summarize, here are our tips on API security: 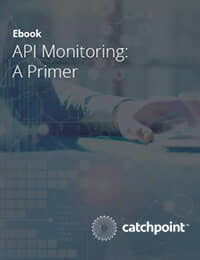 APIs power today's connected digital world, extending the functionality of web applications and driving automation. While they improve extensibility and innovation, API’s can also hurt your end-user’s experience if integrations are not available or functioning properly, so API monitoring has become critical to protecting performance. This primer includes an introduction to ... Read More
« GitOps on AWS: Codifying cloud operations
How To Build Out a Successful Multi-Cloud Strategy »