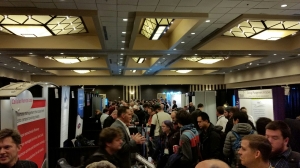 I just returned to frigid Boulder, CO from the USENIX LISA 2014 conference in sunny (not warm, but completely tolerable) Seattle, WA. For those unaware, LISA is the Large Infrastructure System Administration conference, which held its inaugural conference in 1986. A lot has changed in the past 28 years, but LISA continues to demonstrate (and serve) the need for members of large organizations to meet to share and learn the latest techniques, methods, and technologies. One might even venture to say that LISA is a conference that could be unaffected by new technologies and methodologies: until systems and networks can completely manage themselves, it seems highly likely that we won’t arrive at the grand unification methodology for systems administration, nor will we run out of new technologies.

Interest in DevOps on the show floor was somewhat limited based on my many conversations. Some were true converts preaching to create DevOps converts and bolster the faithful, others were debating what DevOps means, and still others were unsure what it was. One even questioned the name, “DevOps,” and instead argued for the term “Operations Automation,” to avoid the unpleasantness involved in trying to figure out who “owns” DevOps: is it developers or systems admins? In my opinion (and I think the prevailing opinion) is that the whole business must own it, similar to the Lean Manufacturing trends of the ’90s. However, out of the many folks I spoke to, DevOps was a primary interest to only about 2-3% of the population.

That’s pretty representative based on my understanding of the general technical population, but that’s perhaps twice what I’ve heard quoted recently, around 1-1.5% overall technical penetration. I take that as a good sign: it says to me that DevOps is being adopted in larger organizations by folks who wield significant power within their organizations.

Out of the distinguished speakers at LISA this year, about 40% of them had some relation to DevOps, even if DevOps wasn’t specifically mentioned: the goal of automating previously manual processes to improve efficiency and time to market was a common theme. Believe me, that 40% number was not generous, others might argue that several other talks were also DevOps-related. LISA continues to show its relevance, bringing the latest methods and technologies into enterprise stalwarts. The future looks bright for large enterprises, with (in some cases) grizzled old system administrators, handily learning new tricks (even if they don’t want to admit it), thanks in part to the LISA conference.

“The Automated Enterprise” e-book shows the important role IT automation plays in business today. Optimize resources and speed development with Red Hat® management solutions, powered by Red Hat Ansible® Automation. IT automation helps your business better serve your customers, so you can be successful as you: Optimize resources by automating ... Read More
« Build security into your app development
What is DevOps and Why Should CIOs Care? »