Akamai Technologies, Inc. this week launched a service that consolidates the process of securing both web applications and application programming interfaces (APIs).

Amol Mathur, vice president of product management and strategy for Akamai, said with the launch of App & API Protector the managed security services provider is making it easier for IT teams to embrace DevSecOps best practices via a converged web application and API (WAAP) service rather than using separate tools and services to secure them individually.

The service is also designed to continuously discover API requests that are then automatically inspected for malicious code. Optional API security controls can be enforced based on policies defined by internal IT teams.

In addition, the company provides access to a multidimensional threat scoring model, dubbed Adaptive, that combines data collected by Akamai with data and metadata from each web and API request to help organizations better understand which threats require immediate attention. Security events are also continuously analyzed using machine learning algorithms to deliver highly accurate policy-by-policy tuning recommendations that can be implemented via a single click.

Akamai security researchers also make use of machine learning and data mining techniques to continuously analyze over 303TB of daily attack data that is used to automatically update protections. Alternatively, organizations can opt to manually evaluate that data themselves to minimize any unexpected impacts those updates might have on their applications.

Other capabilities include built-in bot mitigation tools that are informed by a directory of more than 1,500 known bots, integrations with the Akamai command-line interface (CLI), Terraform or scripts used to drive automated pipelines spanning a continuous integration/continuous delivery (CI/CD) platform. 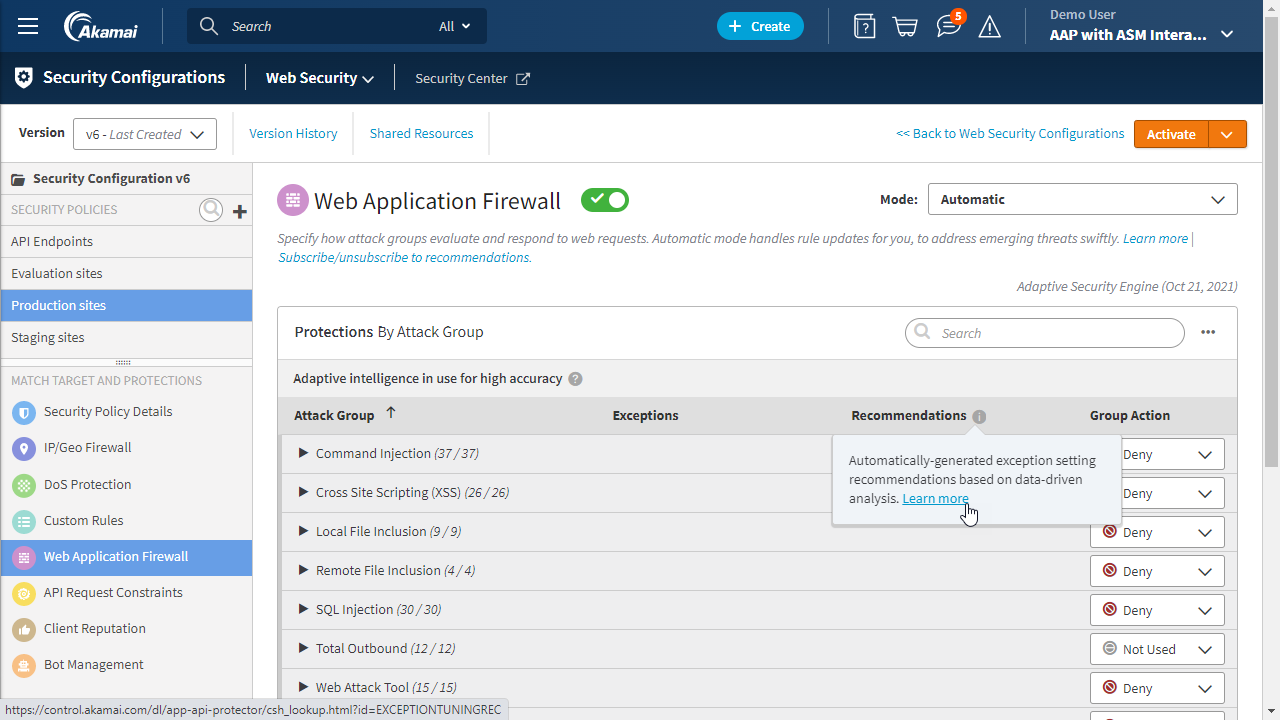 A recent report published by Akamai found that between January 2020 and June 2021 there were more than 11 billion total attempted attacks made over an 18-month period. The most common attack vector was SQL injection (SQLi) at 6 billion attacks, followed by local file inclusion (LFI) with 3.3 billion attacks and cross-site scripting (XSS) with 1.019 billion attacks.

The report also found credential stuffing attacks reached more than one billion attacks and peaked between January 2021 and May 2021. Distributed denial-of-service (DDoS) attacks reached a peak of 90 in January of 2021.

Akamai has been making a case for outsourcing the management of web application and API security via the content delivery network (CDN) it created. Its CDN provides a layer of isolation between web-facing applications and the rest of the enterprise. The challenge organizations now routinely face is that, as they move to deploy cloud-native applications based on microservices, responsibility for security has become more decentralized. The security services provided by Akamai create an opportunity to better manage application security via a single pane of glass at a time when there is more focus than ever on securing software supply chains, said Mathur.

It’s not clear to what degree organizations are going to rely more on managed security services as part of a larger effort to embrace DevSecOps best practices. However, at a time when application security expertise is hard to come by, it’s becoming apparent that, in many instances, relying on an external service provider to secure application environments is the simplest way to quickly improve the overall security posture of any organization.

No matter where you are in your hybrid cloud journey, security is a big concern. Hybrid cloud security vulnerabilities typically take the form of loss of resource oversight and control, including unsanctioned public cloud use, lack of visibility into resources, inadequate change control, poor configuration management, and ineffective access controls ... Read More
« Low-Code and the Rise of the Citizen Developer
Google Makes Fuzz Testing Integration Tool Available »