It is quite interesting to envision how we could adopt the Hadoop eco system within the realms of DevOps. I will try to cover it in upcoming series.  Hadoop managed by the Apache Foundation is a powerful open-source platform written in java that is capable of processing large amounts of heterogeneous data-sets at scale in a distributive fashion on cluster of computers using simple programming models. It is designed to scale up from single server to thousands of machines, each offering local computation and storage and has become an in-demand technical skill. Hadoop is an Apache top-level project being built and used by a global community of contributors and users.

Below diagram portray four components that are available in Hadoop framework. 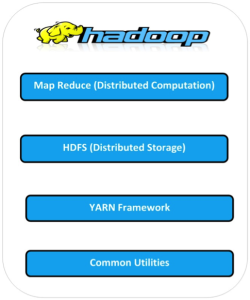 All the modules in Hadoop are designed with a fundamental assumption i.e., hardware failure, so should be automatically controlled in software by the framework. Beyond HDFS, YARN and MapReduce, the entire Apache Hadoop “platform” is now commonly considered to consist of a number of related projects as well: Apache Pig, Apache Hive, Apache HBase, and others.

Hadoop has gained its popularity due to its ability of storing, analyzing and accessing large amount of data, quickly and cost effectively through clusters of commodity hardware. It wont be wrong if we say that Apache Hadoop is actually a collection of several components and not just a single product.

With Hadoop Ecosystem there are several commercial along with an open source products which are broadly used to make Hadoop laymen accessible and more usable.

The following sections provide additional information on the individual components:

Hadoop MapReduce is a software framework for easily writing applications which process big amounts of data in-parallel on large clusters of commodity hardware in a reliable, fault-tolerant manner. In terms of programming, there are two functions which are most common in MapReduce.

Generally both the input and the output are reserved in a file-system. The framework is responsible for scheduling tasks, monitoring them and even re-executes the failed tasks.

HDFS is a distributed file-system that provides high throughput access to data. When data is pushed to HDFS, it automatically splits up into multiple blocks and stores/replicates the data thus ensuring high availability and fault tolerance.

Note: A file consists of many blocks (large blocks of 64MB and above).

Here are the main components of HDFS:

Hive is part of the Hadoop ecosystem and provides an SQL like interface to Hadoop. It is a data warehouse system for Hadoop that facilitates easy data summarization, ad-hoc queries, and the analysis of large datasets stored in Hadoop compatible file systems.

It provides a mechanism to project structure onto this data and query the data using a SQL-like language called HiveQL. Hive also allows traditional map/reduce programmers to plug in their custom map­pers and reducers when it is inconvenient or inefficient to express this logic in HiveQL.

The main building blocks of Hive are –

HBase is a distributed, column oriented database and uses HDFS for the underlying storage. As said earlier, HDFS works on write once and read many times pattern, but this isn’t a case always. We may require real time read/write random access for huge dataset; this is where HBase comes into the picture. HBase is built on top of HDFS and distributed on column-oriented database.

Here are the main components of HBase:

ZooKeeper is a centralized service for maintaining configuration information, naming, providing distributed synchronization and providing group services which are very useful for a variety of distributed systems. HBase is not operational without ZooKeeper.

Algorithms in the Mahout library belong to the subset that can be executed in a distributed fashion and have been written to be executable in MapReduce. Mahout is scalable along three dimensions: It scales to reasonably large data sets by leveraging algorithm properties or implementing versions based on Apache Hadoop.

Sqoop is a tool designed for efficiently transferring structured data from SQL Server and SQL Azure to HDFS and then uses it in MapReduce and Hive jobs. One can even use Sqoop to move data from HDFS to SQL Server.

Pig is a platform for analyzing and querying huge data sets that consist of a high-level language for expressing data analysis programs, coupled with infrastructure for evaluating these programs. Pig’s built-in operations can make sense of semi-structured data, such as log files, and the language is extensible using Java to add support for custom data types and transformations.

The salient property of Pig programs is that their structure is amenable to substantial parallelization, which in turns enables them to handle very large data sets. At the present time, Pig’s infrastructure layer consists of a compiler that produces sequences of MapReduce programs.

Apache Oozie is a workflow/coordination system to manage Hadoop jobs.

Flume is a framework for harvesting, aggregating and moving huge amounts of log data or text files in and out of Hadoop. Agents are populated throughout ones IT infrastructure inside web servers, application servers and mobile devices. Flume itself has a query processing engine, so it’s easy to transform each new batch of data before it is shuttled to the intended sink.

Ambari was created to help manage Hadoop. It offers support for many of the tools in the Hadoop ecosystem including Hive, HBase, Pig, Sqoop and Zookeeper. The tool features a management dashboard that keeps track of cluster health and can help diagnose performance issues.

Hadoop is powerful because it is extensible and it is easy to integrate with any component. Its popularity is due in part to its ability to store, analyze and access large amounts of data, quickly and cost effectively across clusters of commodity hardware. Apache Hadoop is not actually a single product but instead a collection of several components. When all these components are merged, it makes the Hadoop very user friendly.

No matter where you are in your hybrid cloud journey, security is a big concern. Hybrid cloud security vulnerabilities typically take the form of loss of resource oversight and control, including unsanctioned public cloud use, lack of visibility into resources, inadequate change control, poor configuration management, and ineffective access controls ... Read More
« Secrets to win over DevOps buyers
DevOps, Containers and Faster Time-to-Parity »