Home » Features » How To Foster a Culture of Citizen Developers

What can leaders do to encourage a thriving environment of citizen developers in their organization?

Over the last several months, businesses of all sizes have had to embrace rapid change, as have their workforces. When it comes to IT departments, even before the pandemic many were fielding requests to implement new technology, customize solutions to niche problems and automate specific tasks at rapid rates. Unfortunately, these increased demands coincide with an ongoing developer drought, and paired with the pandemic, have put an added strain on some already thinly stretched IT teams.

As a result, there has been an observable rise in citizen developers being tapped to relieve some of this burden. “Citizen developer” here is used to describe any programming novice or non-developer who has been tasked with the responsibility of constructing custom applications. This person has some familiarity with programming but may not have been formally trained and, therefore, may use their own set of tools and workarounds to complete the work. If leaders don’t make an effort to create standardization, the consequence can be high variability in quality, efficiency and output.

And it doesn’t seem to be a passing phase. I recently spoke with Dave Garrett, chief strategy and growth officer at Project Management Institute. As we look to the future, Garrett believes that citizen developers will play a critical role in helping organizations stay agile and ensuring projects move forward without delay.

Though it won’t solve all of your pressing technical concerns, the good news is that with smart strategies, a citizen development emphasis can ease the burden on IT teams and improve output. Garrett spoke to a sea change of new techniques being developed to respond to these growing needs.

To start, build a solid foundation by choosing standard toolsets. Be sure all development staff is made aware of the toolsets you’ve deemed standard, clarify that adopting them is a priority and ensure that all have access. Standard approaches to using these tools should also be established and communicated, such as programming languages and stylistic standards.

“If you have a standard toolset and approach, then you have many people who can help,” Garrett said, emphasizing that by doing so, you are building a broader base of support. Having a larger pool of employees to pull from helps an organization stay on top of the necessary tasks and creates more freedom for open collaboration. As a bonus, professional developers are freed to focus on more advanced tasks, such as machine learning and or mathematically complex programming.

In deciding which toolsets and approaches to make standard, Garrett said, ask yourself, What will get them from A to B most quickly and efficiently? One approach to this is low-code or no-code tools. He considers such platforms transformational in empowering citizen developers to express ideas tangibly without a great deal of coding.

From here, ensure that all development staff, especially your citizen developers, have been technically trained in adopting the standard toolsets and approaches that have now been established. This may include offering training in low-code UIs and instilling fundamental programming concepts such as boolean logic and conditional programming such as If/Then/Else statements.

“Set a foundation of success for learners,” he said. For example, have them build something of value during training, making it as actionable as possible for the use cases they will be handling.

3. Discouraging Use of Shadow IT

Once you have established toolsets and training, leadership should do whatever’s possible to enforce the established standard’s adoption and discourage the use of shadow IT—tools, applications and workarounds not approved by leadership within the company. Shadow IT, as a practice, can be messy, creating high variability and making quality-control and collaboration difficult. “You want to avoid it,” Garrett said.

One way to think, Garrett said, is hyper agile. This can apply to team size, smart PM cycle lengths and brainstorming techniques.

In thinking of ideal team size, ask: How can the team be optimized to work quickly and efficiently? One suggestion Garrett had was to ensure your team isn’t too large to effectively train, mentor and govern. For example, as a rule of thumb, he mentioned the old “two pizzas” rule: A team size shouldn’t require more than two pizzas to share a meal.

Sigh. Remember things like in-person training? Pizza parties? Obviously, old meetups can’t be executed exactly to plan these days, except with some clever contactless delivery tactics, but you get the idea. A strategically sized team will create an efficient workflow and collaboration in your team dynamics.

As projects come in, an agile cycle length, or sprint, for completing a specific set of work should be determined. What is an efficient amount of time to expect a team to turn out a project? To determine this, sprints should start with a planning meeting during which the product owner defines the work criteria. The development team determines a realistic time frame to complete the work scope. The scrum master or team manager typically makes this call.

The lengths of agile sprints can vary—some may be two weeks, while others may be 30 days—depending on the scope of work. Most project management experts recommend you aim to keep your cycle length consistent, so teams get used to working within a set amount of time.

Bringing attention to how your team ideates together is an excellent way to build agile collaboration. Brainstorming as a development team fosters collaboration and allows you to aggregate the talent and pull ideas together for the best output, whether you’re trying to solve a niche problem or simply join forces around how best to complete the sprint.

Garrett recommended bringing people together in smaller groups for round-robin brainstorms and creating as you’re ideating. “Thus, iterations happen fast,” and all team members are given a chance to express their ideas in a tangible way.

Once citizen developers see success, you can then use the excitement of building applications and solutions together to drive things forward, he said. Your anchor is a cool product that gets people excited—great for both morality and high-quality output.

When Are Citizen Developers Appropriate?

The question should be asked: When is it appropriate to call on citizen developers? Garrett recommended performing a suitability assessment to identify the best use cases for citizen developers. This will help the organization understand when it’s smartest to bring them in.

The easiest way to answer this may be to consider: When isn’t it appropriate? Assigning advanced processes to citizen developers such as algorithm-heavy, mathematically complex programming or core product functionality is usually inappropriate, he said. Instead, utilize citizen developer talent for constructing internal business utilities that can be automated easily.

There are formal suitability assessment tools that look at scores and attributes for applications to help you make this call. “However, everyone’s different,” Garrett noted. “You have your own ways of working, given context, goals and what you’re trying to accomplish.” So it may make the most sense to perform your own internal suitability assessment.

According to a recent PMI report, over the past five years half of organizations have recognized team members who brought innovative ideas forward, but:

By contrast, their research shows that those promoting innovative practices see stronger results. Case in point:

The trend PMI sees on this front is that organizations want to innovate, but don’t always know how to make it happen. So, how might they push innovation forward? If you can implement a strong citizen development toolset, you can “enable innovation to bubble up,” Garrett said. The hope is this guide offers a blueprint for fostering just that. 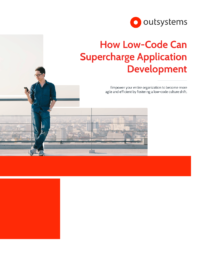 How Low-Code Can Supercharge Application Development

Coding is a largely manual and inflexible process with long lead times. Quickly spinning up a mobile app to address a new business requirement or updating an existing system for faster response time is not attainable with hand-coding. Low-code offers a way forward for the business agility enterprises need now, ... Read More
« SmartBear Announces Investment from Vista Equity Partners
Using PAM to Support the ‘Sec’ in DevSecOps »