WhiteSource today announced that it has developed the first-ever tool that automatically remediates vulnerabilities discovered in custom code.

Rami Sass, WhiteSource CEO, said WhiteSource Cure surfaces recommendations for fixing security vulnerabilities in code that developers can then apply with a click of a button. WhiteSource has a long history of providing tools that discover vulnerabilities in open source software that it tracks via a database it manages, but Sass said customers are making it clear they need a way to automatically remediate those issues in a way that doesn’t adversely impact developer productivity.

The average developer spends, on average, half a day fixing a single vulnerability, so the impact security issues are having on the rate applications are being developed is significant, added Sass. WhiteSource Cure gives each developer the equivalent of their own personal security expert, noted Sass.

Developers can either apply the remediation suggested by WhiteSource Cure—that manifests itself as a pull request in a DevOps pipeline—or they can fine-tune it as they see fit, said Sass. 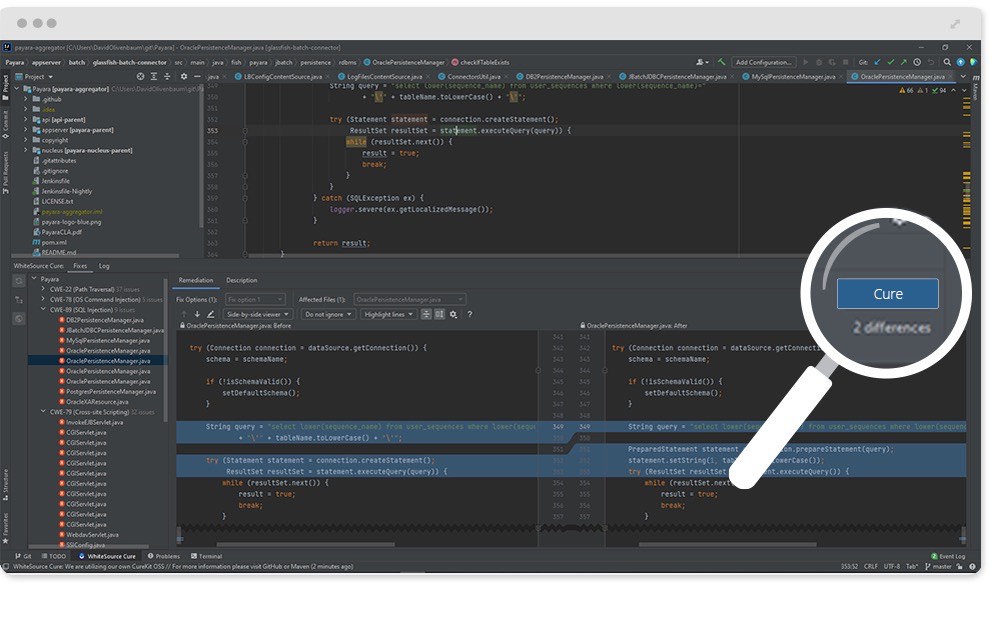 WhiteSource Cure arrived as friction and tensions between developers and cybersecurity teams rise in the wake of a series of high-profile attacks against software supply chains. As a result, organizations are instituting more thorough security reviews of application development projects. The concern is those reviews will dramatically reduce the rate at which applications are being delivered.

Of course, many organizations are looking to shift responsibility for application security further left toward developers to minimize the number of vulnerabilities that might need to be remediated either just before an application is deployed in an on-premises IT environment or, worse yet, after it is deployed. Trying to achieve that goal within the context of DevSecOps best practices, however, is challenging. Organizations first have to acquire vulnerability scanning tools that developers will actually use, and then provide developers with the training required to identify various classes of vulnerabilities.

Sass said that rather than relying on machine learning algorithms and other forms of artificial intelligence (AI) to build WhiteSource Cure, the team that developed the tool found that more traditional approaches to software composition analysis (SCA) provided more reliable results.

It’s unclear whether the ability to automatically remediate known vulnerabilities in code will render much of the DevSecOps debate moot. However, it’s clear that the simplest path forward toward achieving DevSecOps is, as always, to automate as much of the remediation process as possible. The challenge will be waiting to see how much confidence developers and cybersecurity teams will have in the recommendations generated.

Now, more than ever, companies who rapidly react to changing market conditions and customer behavior will have a competitive edge.  Innovation-driven response is successful not only when a company has new ideas, but also when the software needed to implement them is delivered quickly. Companies who have weathered recent events ... Read More
« CircleCI Survey Shows the Need to Prioritize DevOps
EP 10: Observability & Continuous Improvement »