Most apps require some sort of user data to function properly. Google Maps needs location data to offer routing services. Twitter needs photo library access to upload a photo, and so on. Many users are quick to allow access to personal information without hesitation. However, in recent years, it’s become apparent that many apps are collecting (and leaking) an excessive amount of personal data, resulting in serious privacy issues. This has led Apple to give user privacy a heightened focus in recent iOS updates and marketing campaigns.

Often, user data is being collected in the background for legitimate use cases, such as tailoring personalized user experiences and refining app performance. But, many apps are also monetizing user data by reselling it to third-party advertising data brokers without explicit user consent. More seriously, recent studies show that commercially available “anonymous” data can be de-anonymized. If location data is exposed, it could put at-risk people in actual danger. These are nuanced privacy violations that U.S. regulators have yet to respond to and address.

To shed light on the data that apps are collecting, a recent study conducted by Jamf analyzed the iOS permissions requested by nearly 100,000 popular apps on the App Store. The study found the four most-requested mobile app permissions to be photo roll, camera, location data and microphone. The findings also revealed that popular apps are consistently requesting access to data that does not serve the application’s core purpose.

Users should consciously be aware of the data they allow apps to access. Yet, the onus is also on business leaders and app developers to limit unnecessary data collection and reduce the potential for data overexposure. In the wrong hands, access to device hardware, such as a microphone or camera, could be used to steal sensitive material. And, if leaked, personally identifiable information (PII) exploits could be disastrous to the business.

Below, I’ll review the key takeaways from the Jamf study and consider if the constant barrage of permissions requests is exacerbating privacy issues during the application development process. 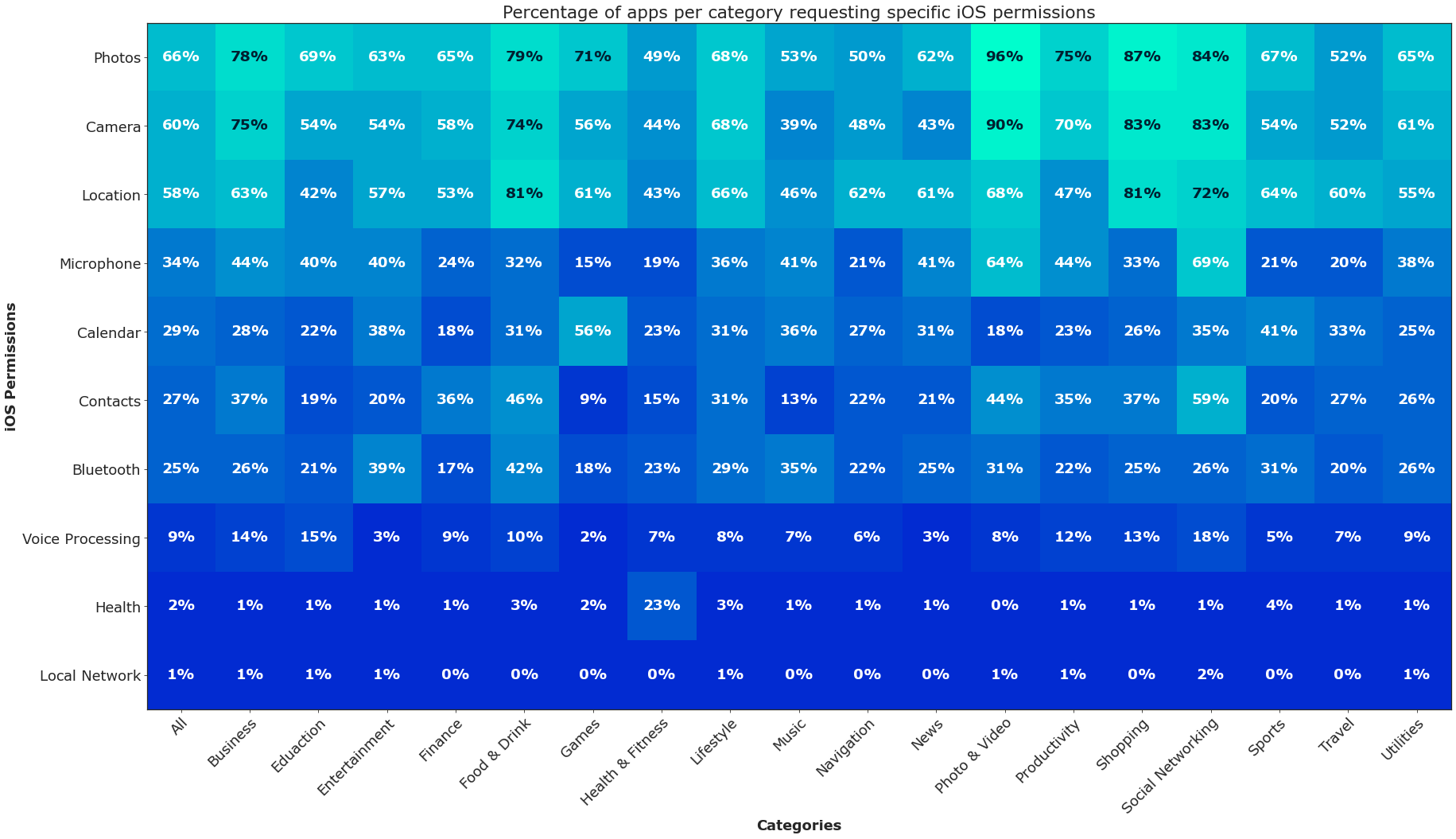 By far, the most requested data access type is photos. At least half of apps across all categories request access to user photo libraries. Naturally, this request is most common among photo and video apps such as YouTube, FaceApp or Splice; 96% of such apps request access to photos. This is followed by 87% of shopping apps (Amazon, Shop, eBay, etc.), and 84% of social networking apps (Facebook, Instagram, Twitter, etc.).

At issue here is that the level of intended photo library access can be highly variable. For example, granting access to an entire camera roll along with decades of old personal photos just to upload one picture grants a rather invasive privilege. This has led Apple to enhance privacy controls—users can now choose to allow access to select images only or their entire roll.

With these new constraints in mind, app developers should take steps to respect user privacy. Be aware of potential photo limitations and design apps to only collect necessary photos for the task at hand.

The next-most requested permission is for camera access. This is most common among photo and video apps, among which 90% request camera access. This is also common among shopping and social networking apps (83% each) and business apps (75%) like Zoom, Slack or WebEx. Similar to findings about photo library access, enabling camera access is ubiquitous. However, it is also one of the most dangerous permissions to grant indefinitely. If a bad actor obtained account access, this vulnerability could enable them to spy on users.

Again, developers should consider introducing camera functions only when it’s essential for the task at hand. Obviously, it’s unethical to invoke camera access when users are unaware. Even camera-related bugs can have extreme repercussions. For example, a 2020 lawsuit against Instagram argued the app was spying on users. Due to its threat potential, high-security facilities have disabled camera hardware entirely.

Location tracking is another permission that can be very useful but is, at times, overprescribed in modern app development. Location data includes cellular, Wi-Fi, GPS and Bluetooth data used to determine a user’s approximate location. The categories that collect location data most often include shopping and food and drink, both at 81%. Social networking and photo and video app categories follow at 72% and 68%, respectively.

Nowadays, iOS privacy settings offer a check against tracking location data in the background. iOS users can now choose between: ‘Allow While Using App’, ‘Allow Once’ or ‘Don’t Allow’.

When an app tracks data in the background, a blue indicator now displays in the status bar to increase user awareness. iOS also reminds users when apps use significant amounts of location data and offers ways to turn location services completely off. Android has followed suit with an ‘Allow only when the app is in use’ function, too.

Location tracking feels a bit creepy. In the wrong hands, it could easily be leveraged for nefarious purposes. Out of all the permission-granting options, location data presents much more of a physical safety concern for the end user. From the user’s standpoint, they should only enable access to location tracking while using an app. From a developer’s standpoint, they should be extremely careful when collecting and storing such PII to ensure regulations aren’t broken.

Lastly, access to the user’s microphone is the fourth most commonly requested permission. The survey found 69% of social networking apps, 64% of photo and video apps and 41% of both business and productivity apps (Asana, Google Calendar, TimeTree, etc.) all want to be handed the mic.

Here, potential privacy concerns are similar to those involving camera access. Bad actors could potentially activate the mic to listen to private conversations, record ambient noise and sell findings to advertising brokers. To increase user awareness, iOS 14 now requires an orange dot to display, indicating when the mic is in use.

User behavior tracking and app-to-app information exchange is another ongoing area of privacy concern. Companies often resell such information to data brokers, which is then used to refine highly targeted ad campaigns on third-party sites. This is how your search on Google results in product advertisements popping up in your Instagram feed. Apple is just starting to counter this practice with their App Tracking Transparency feature. In iOS 14.5, app devs must ask whether they can track your activity.

Recent analysis has confirmed that commercially available consumer data, though labeled as “anonymized,” can successfully be used to piece together an accurate picture of a user by corroborating behavior on other apps. For example, users were able to track and pinpoint behavior that resulted in the outing of a catholic priest on Grindr. Smartphone app data could similarly be used by predators to spy on celebrities or politicians, posing a tangible security threat.

Another cause for concern is metadata associated with photos. People often enable GPS-embedding into images to help organize their photo memories. If this is inexorably linked to photos, it essentially permits location data sharing to parties with photo library access who might not otherwise have location tracking permissions.

From Big Data to Big Problem

Perhaps the most curious finding of this report is that all apps are requesting permissions that seem irrelevant to their core value proposition. For example, why do 87% of shopping apps need access to a user’s entire photo library? Do 46% of food and drink apps really need access to a user’s personal contacts to place a food delivery order? Do navigation apps really need your personal calendar information to calculate a route downtown?

The answer is not a pretty one. There has been a business imperative, for years, to track and collect large amounts of user data. There is undoubtedly an argument to be made for enhancing the user experience with innovative features and the role of big data in AI. However, this ongoing practice continues to creep into ethical gray areas. The fact is, the more personal data an app collects, the more potential privacy issues and security threat vectors are created in the process.

Requesting permissions to on-device hardware and data collection is not always necessary. Thus, to stay safe and limit data overexposure, don’t overprescribe data collection. If it’s not fundamental to your app’s core function, don’t collect it, and don’t store it. Think twice before requiring many device permissions, and regularly audit app permissions requests to keep them to a minimum. As iOS and Android introduce new platform guidelines to elevate user privacy, developers should be prepared for users to grant fewer and fewer data collecting permissions. This is their right.

It would be great if tech companies invested in honest, ethical business models that didn’t rely on harvesting and reselling user data to shady advertisers. And for those that mine user data but say it’s anonymous, I would point to reports that show anonymous data is nothing but pure myth.

While building constructive culture, engaging workers individually and helping staff avoid burnout have always been organizationally demanding, they are intensified by the continuous, always-on notion of DevOps.  When we think of work burnout, we often think of grueling workloads and deadline pressures. But it also has to do with mismatched ... Read More
« At the Movies
How to Achieve AWS Competency Accreditation »